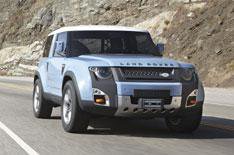 The next Land Rover Defender needs to be even more radical than the DC100 concepts, [Land Rover](https://www.whatcar.com/land rover) design boss Gerry McGovern has revealed to What Car?

Speaking at the 2012 Beijing motor show, McGovern admitted that the concepts have been well received since they were first shown last year but that the final production version should be less of an homage to the 60 year old original.

Were being too constrained, we need to bold and assertive, he said. Ive got no desire to replicate the original.

McGovern did admit that the real Defender, due to go on sale in 2015, would have some elements of the DC100, but hinted that it would be substantially different with a more functional look.

He also said that it will not trade comfort for a need to be more utilitarian than some of the companys more upscale products.

McGovern also revealed that he plans three families of Land Rover products, that should all look and feel more cohesive than the current line up: Range Rovers, Defenders and a Land Rover family (including the next-generation Land Rover Freelander and Discovery) which will look more related to each other than the current offerings.