* Five-door hatchback * Designed in the UK * Will be built in Britain, too... 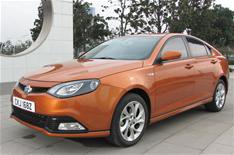 A new, British-engineered MG has been revealed at the Guangzhou motor show in China.

UK sales are a possibility
The MG 6 hatchback will initially be sold only in China, but MG's owner, SAIC, has confirmed that the car can meet European and American safety standards.

Much of the design and engineering work on the MG 6 was carried out in the UK, with the styling undertaken by a team based at SAIC's studios in Warwickshire.

The 6 is the first all-new MG to be unveiled since the sale of the brand to Chinese car maker NAC following the collapse of MG Rover in 2005. NAC was subsequently taken over by SAIC.

The MG 6 shares many of its mechanical components with the Roewe 550, which is already on sale in China. Buyers can choose between two different 1.8-litre petrol engines, both believed to be based on the Rover-designed 'K'-series. The entry-level engine produces 133bhp, while the range-topping turbocharged version has 160bhp.

SAIC's president Chen Hong has told the Reuters news agency that the company plans to produce the car in the UK at its Longbridge factory by the end of 2010.