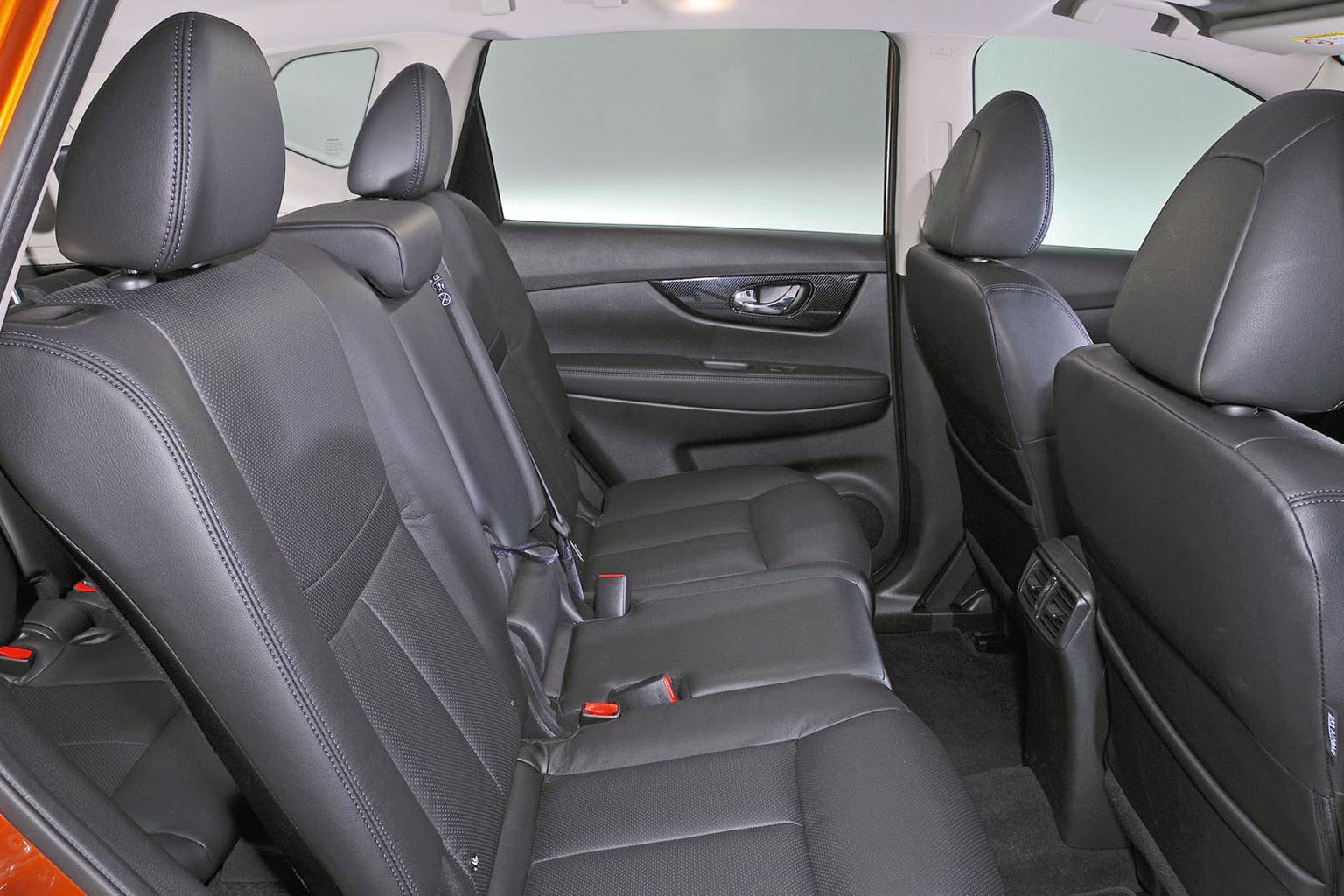 Leg room is plentiful in the front of all three, so you’ll be able to stretch out even if you’re over six feet tall. Yet you might be conscious of your head hovering just below the roof-lining in the X-Trail, due to its space-zapping panoramic sunroof. It’s a similar story in the 5008 if you choose the panoramic roof as an option. With no panoramic roof on our test car, head room in the Kodiaq is fit for a bishop’s hat. Even with one fitted, space is still acceptable.

All have a good amount of storage space to stuff your oddments into, but the Kodiaq offers the most. Its two decent-sized gloveboxes and huge door bins beat the X-Trail’s equivalents. The 5008’s glovebox is pokey, although a big cubby under the central armrest makes amends.

We’ve mentioned the head room issues created by the panoramic roof in the X-Trail and 5008, but it’s in the middle row that this is felt most acutely. You don’t have a choice in the X-Trail, because it’s standard, but think carefully about ticking this option in the 5008. Yes, it may flood the rear seat area with light, but taller adults will have their heads wedged against the ceiling. With or without this roof, there are no issues with head room in the Kodiaq’s middle seats. 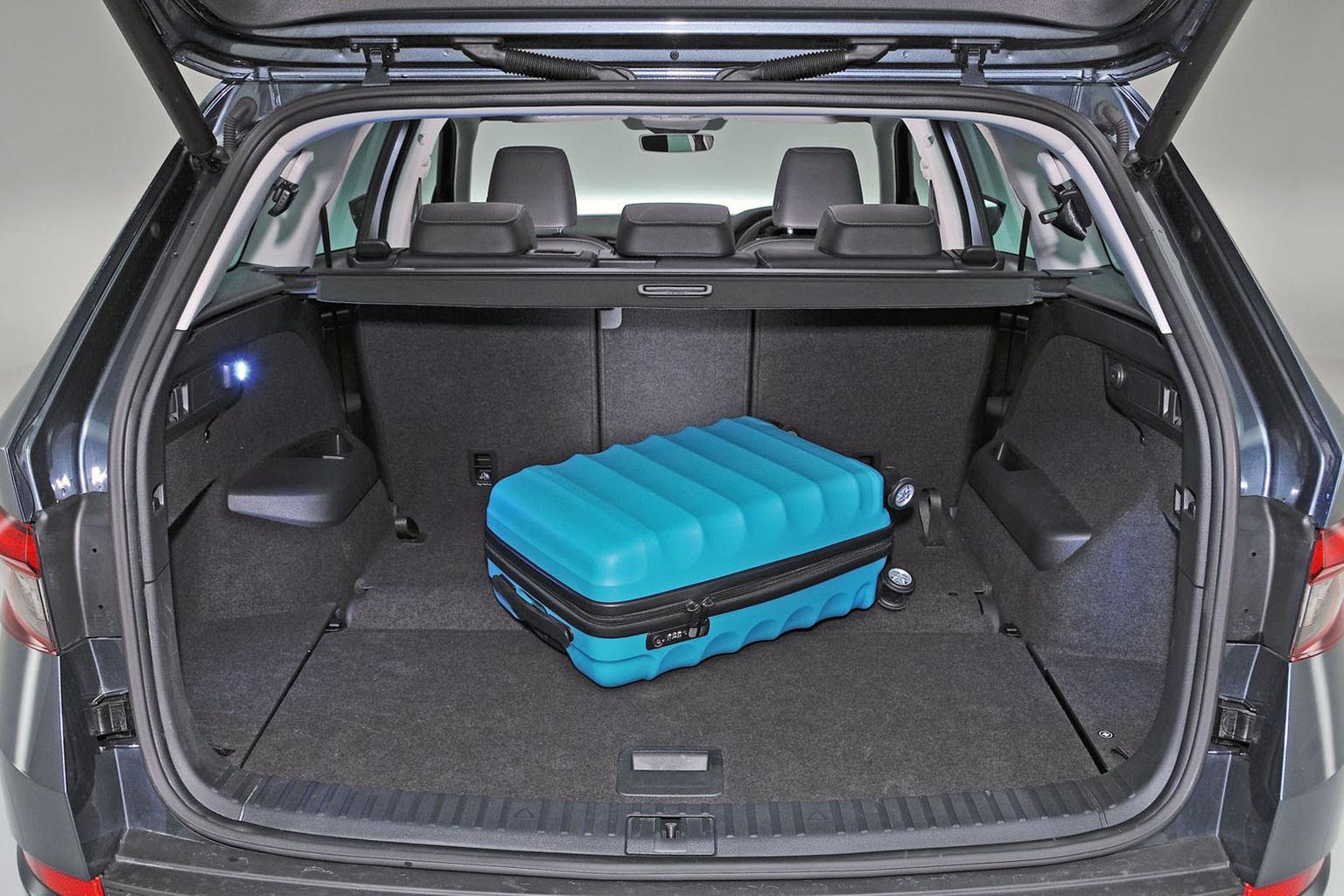 The Kodiaq has the best middlerow leg room, even if the 5008 has the most space on paper, but even that car is fine for those with lanky legs. The 5008 is the best at seating three in that row, though; it’s the only one with three individual chairs. In the others, the middle seat is a raised perch. And there’s no central tunnel along the 5008’s floor to rob foot space.

All three cars can seat seven by dint of two foldaway seats in their boots. These are easy to erect, but getting into them is a struggle for adults. To do so, first you need to slide the middle-row seats forward in all the cars, compromising leg room for passengers there, and even then space is tight. The 5008 is the one you’d choose to sit in if you had to; the Kodiaq has limited head room and the X-Trail is cramped for leg room. All three are fine for kids, though. 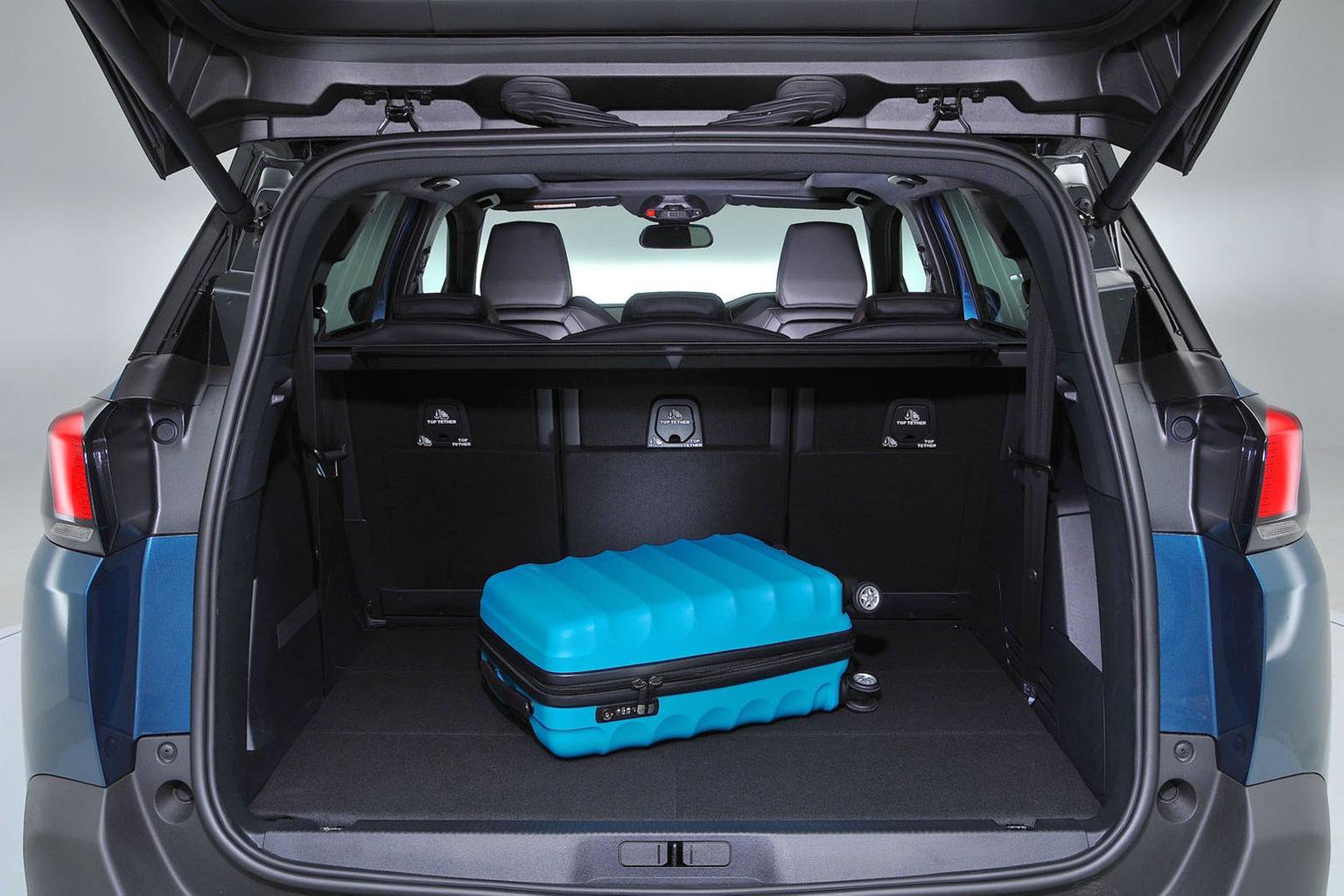 With the rearmost seats folded away, the 5008 has the biggest boot; we managed to fit 10 carryon suitcases below its tonneau cover. The Kodiaq swallowed nine, while the X-Trail’s tally of just eight is a little disappointing for a large SUV. The 5008 is also the only car with three equally sized split-folding seats, compared with the Kodiaq and X-Trail’s less fl exible 60/40 arrangement.

With their rear seats folded down, all provide a long, fl at load deck and, with no lips at the boot entrances, sliding in heavy objects is made easier. A bonus with the 5008 is that you can fold the front passenger seatback fl at, creating up to three metres of space for extra-long loads. 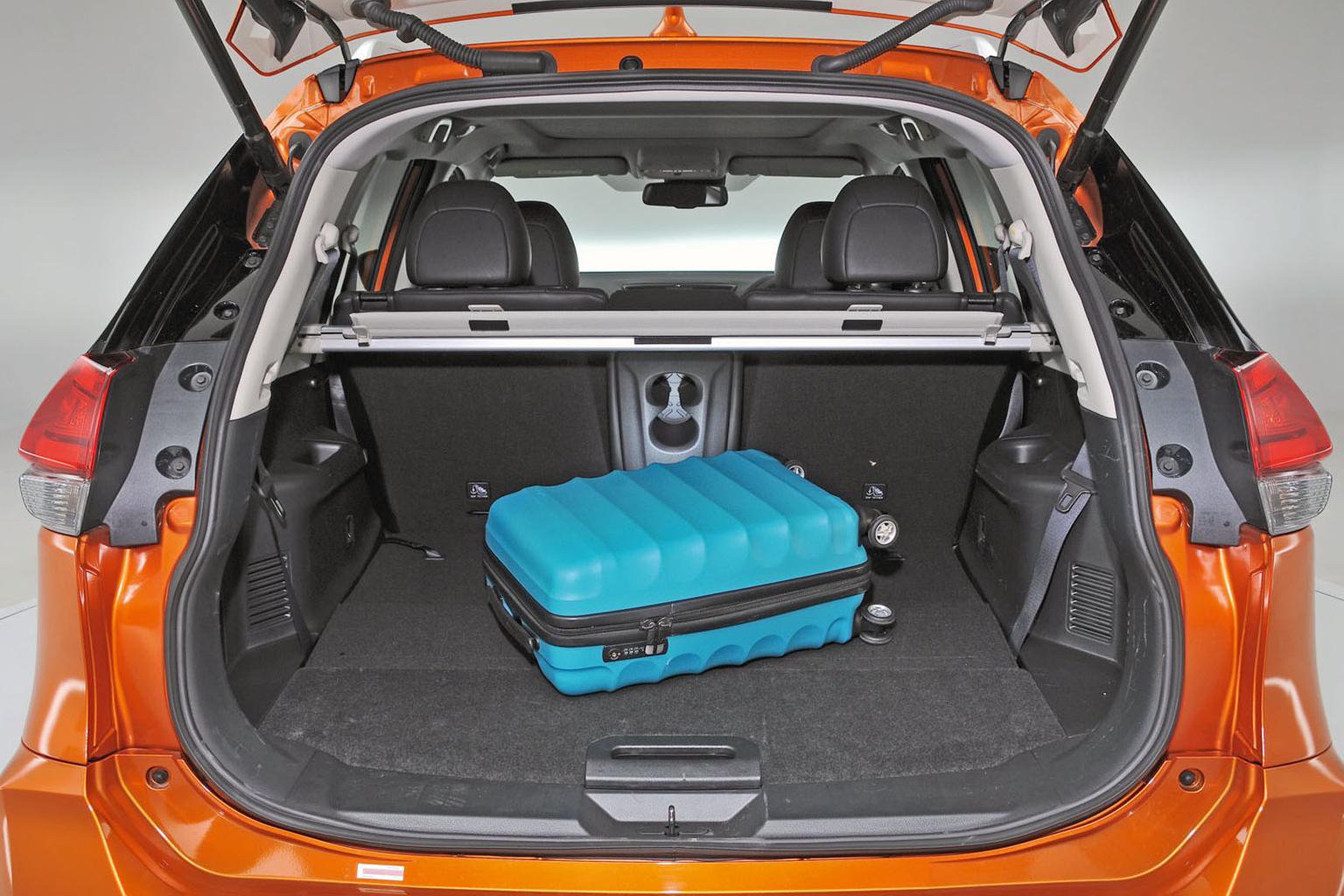 Boot is smaller than the others’, but the X-Trail is the only car here to get a gesture-operated, powered tailgate, so you can open it even with your hands full. 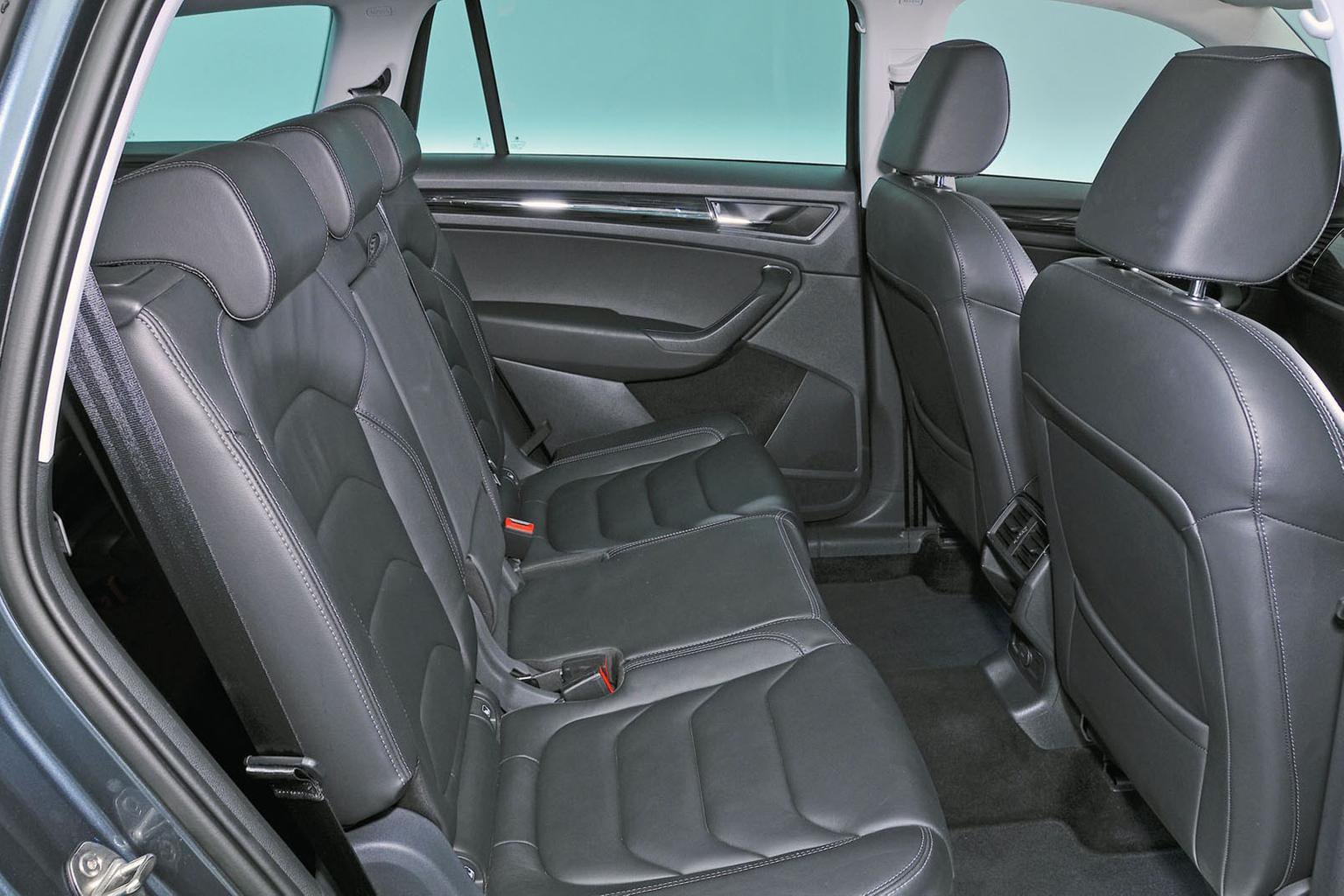 Easily the best boot here. At its narrowest point, the 5008’s load bay is the widest and also the tallest from floor to ceiling, while its floor is the lowest to the ground. 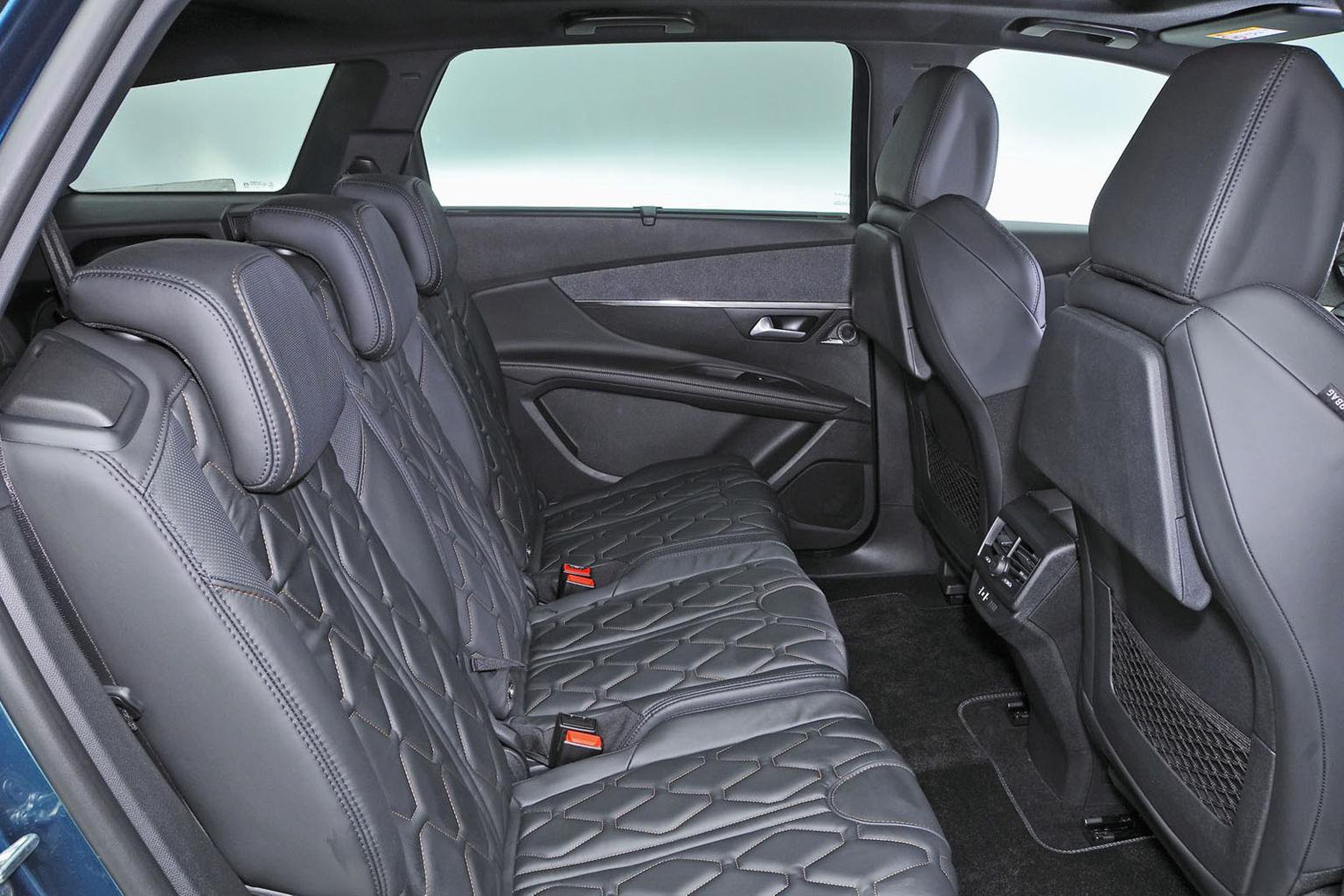 In five-seat mode, space falls shy of the 5008, but it has the most room with all seven seats up. There’s underfloor storage, plus cubbies behind the rear wheel arches.