Each of our contenders comes with a height and reach-adjustable steering wheel and a manually adjustable driver’s seat that can be ratcheted up and down. In the 208 and Polo, you can adjust the backrest angle using a little wheel at the side of the seat, whereas the Clio has a lever to do the job. It’s easier to reach but, with a set number of positions, offers less scope for fine tuning.

Disappointingly, you don’t get (and can’t add) adjustable lumbar support on the Clio and Polo. You can on the 208, but you’ll have to dig deep; it’s part of a package that includes leather seat trim, a fully electric driver’s seat and even a back massage function and will set you back a hefty £1400.

That’s a shame, because the 208 has the least lower back support, as well as the least side support in corners. The Clio’s sportily  bolstered seat holds you in place the best through bends, but it could also do with more lumbar support. On balance, the Polo’s seat is the best but still isn’t ideal, being the firmest and having a relatively acutely angled squab that presses against your legs. 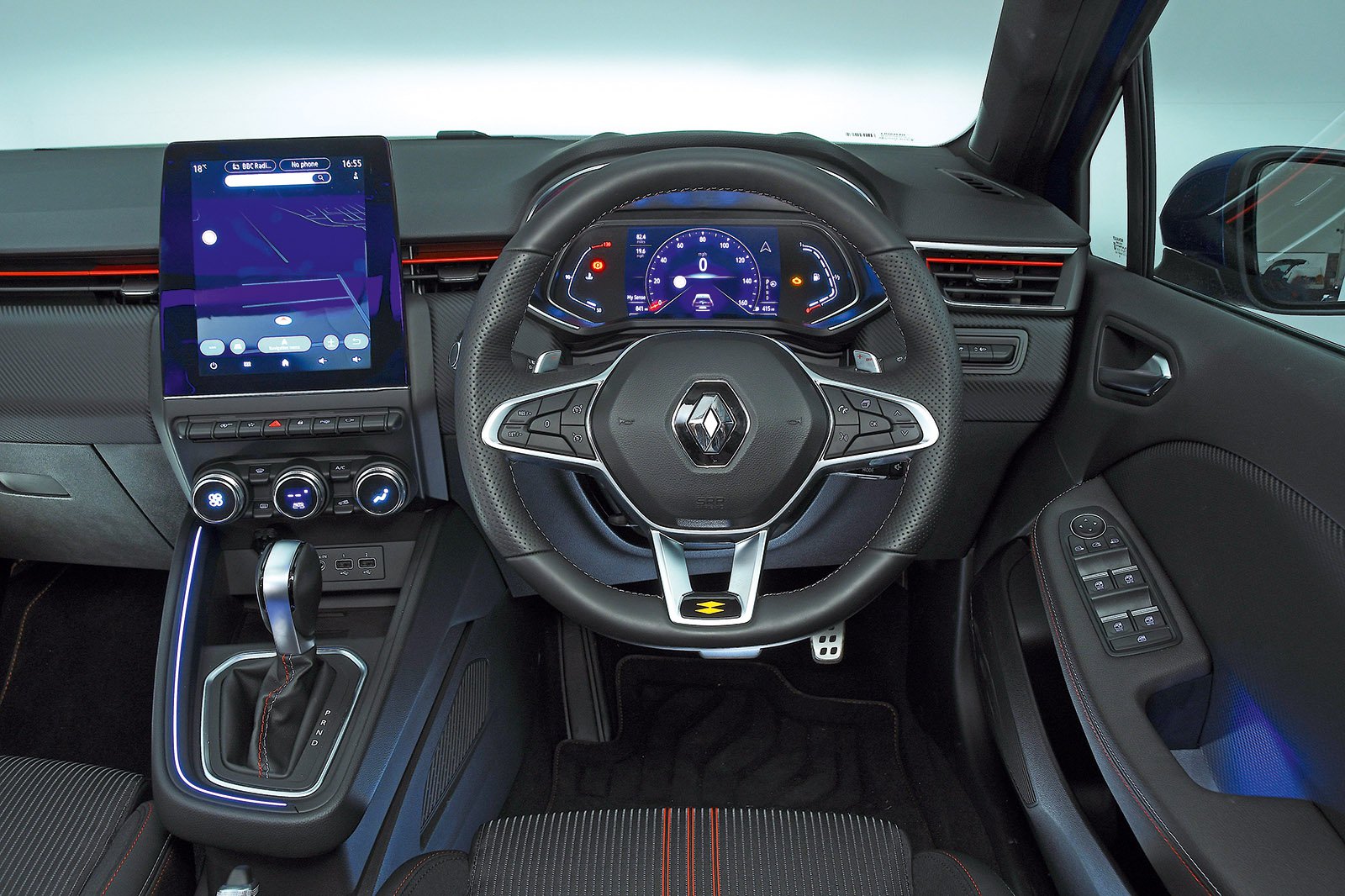 Yet the Polo has more to recommend it. It has the best arrangement of its pedals, seat and steering wheel, so you feel the most at home behind the wheel. The Clio’s steering wheel isn’t quite lined up centrally with its driver’s seat, and unless you raise the 208’s seat significantly, you feel like you’re sitting on the floor.

As with other Peugeots in recent years, the 208 has a tiny steering wheel and a high-set instrument panel. This is meant to make the dials easier to see by allowing  you to view them over the wheel rather than through it, but it doesn’t work as well in the 208 as it does in some of Peugeot’s bigger models; some drivers will find that the rim gets in the way. Because there’s no issue seeing the instruments in the other two cars, Peugeot’s approach feels like the answer to a question no one asked.

On the plus side, the 208’s instruments are thoroughly modern. They’re rendered digitally in 3D and can be configured in a number of preset styles. The Clio has part-digital dials on a smaller 7.0in screen, while the Polo makes do with regular – albeit very legible – analogue instruments, separated by a small information screen. If you wish, you can upgrade the Clio to fully digital instruments for an extra £250 and the Polo for £475.

In terms of usability, the Polo is no trickier to operate than a toaster. Its ultra-simple dashboard layout contains big, clearly marked buttons for most controls, so you can operate them easily on the move. The Clio is also pretty logical, although its stereo controls, tucked away behind the steering wheel, are a faff to use until you’ve learnt what each button does. The 208 takes a similar approach with its cruise control buttons, while the Polo (if you spend £285 to add cruise control) puts the switches for both functions on the wheel, where you can see and use them more easily. 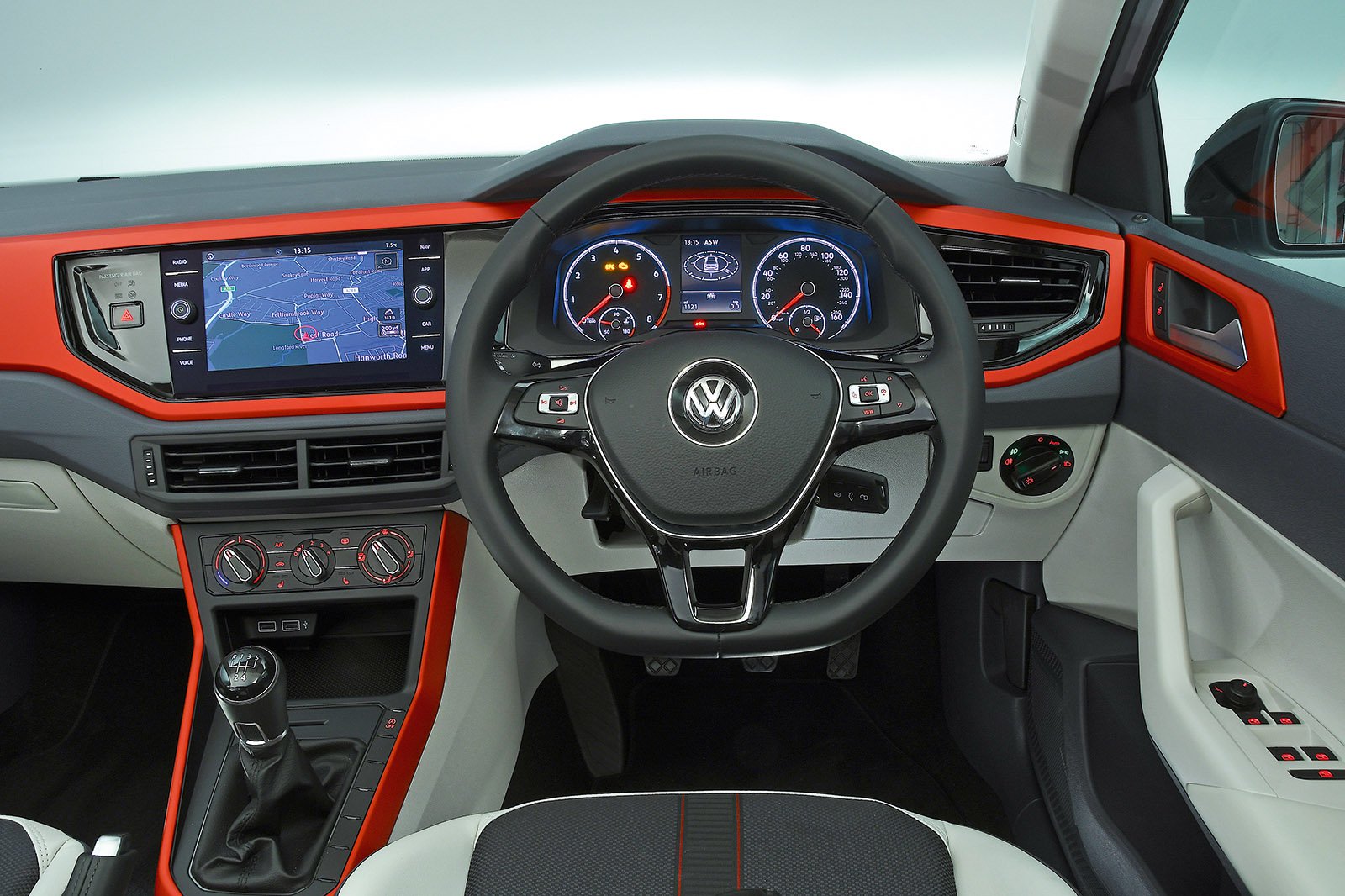 The 208’s fiddliness doesn’t end there. Adjusting the temperature has to be done using the central touchscreen, rather than simply twiddling a knob, as you do in the others. There are simple toggle switches for various functions on its centre console, but behind these is a row of distracting, touch-sensitive buttons. Why distracting? Well, as with the touchscreen icons, you have to divert your eyes from the road to ensure you hit them accurately.

It may be fiddly, but the 208 interior isn’t lacking in glamour. It’s arguably the most striking inside of any small car, and on the whole the materials look and feel smart. The Clio, in RS Line trim at least, actually has a few more soft-touch finishes than the 208 and fancy ambient lighting, but overall it doesn’t have the same panache. It feels flimsier, too – as evinced by a centre console that moves if you lean against it. The Polo Beats interior comes with a variety of contrasting colours and is robust, but is it plush? Apart from some squidgy plastic on top of the dashboard, every surface is harsh to the touch, so not really.

The Polo is the easiest to see out of when parking. That’s because it has the thinnest windscreen pillars and the most open glass area at the rear, while both of its rivals have upswept rear window lines that obstacles could lurk behind. Factor in the 208’s chunkier windscreen pillars and it’s hardest to see out of in all directions. On the plus side, it comes with rear parking sensors, but that’s nothing compared with the Clio, which has front and rear parking sensors plus a reversing camera. The Polo has zilch in terms of visibility aids and, like the 208, dim halogen headlights. The Clio’s are brilliant LED bulbs.