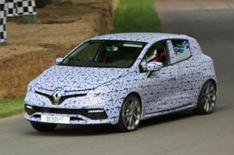 The new Renault Clio has been previewed at the 2012 Goodwood Festival of Speed.

A heavily disguised prototype of the hot hatch Clio Renaultsport model made a surprise debut at the show with a drive up the hillclimb route.

Despite the car's cladding, the new Renaultsport Clio's aggressive styling is clearly visible, with twin exhaust tailpipes at either side of a rear diffuser. Unlike the current model, the new Clio will be available as a five-door only. Renault has already confirmed it won't offer a three-door version.

Technical details are yet to be confirmed, but the new Renaultsport model is reported to have a turbocharged 1.6-litre petrol engine, rather than the current car's naturally aspirated 2.0. Power output is likely to be just over 200bhp; up on the current car's 198bhp.

As well as more aggressive styling inside and out, the Renaultsport Clio will have suspension and steering upgrades over lesser Clio models. A Cup version with less kit to reduce weight and firmer suspension is likely.

The Renaultsport Clio is due on sale in the UK in spring 2013. It arrives a few months after the standard Clio. The all-new model goes on sale in October, and full details we'll have full details on Tuesday, July 3.