More for you |
Car recalls: what are they and what to do if your car is recalledVauxhall Zafira B recalled again over safety concernsTrue MPG: most efficient MPVs and estate cars 2020Used Ford S-Max vs Vauxhall Zafira Tourer Best used 7-seater cars 2019 (and the ones to avoid)
Home
News
New Vauxhall Zafira on sale next year
news 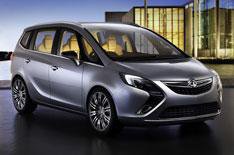 This is the new Vauxhall Zafira that will be on show in Geneva next week and you'll be able to buy next year.

Officially, it's merely a concept, but most of what you see is what you'll get when the car hits the showrooms.

It features a new variation of the Flex7 seating system that's been a Zafira trademark from the beginning.

Now, when the two rear-most seats are stored in the floor, the one in the centre of the second row can be folded out of the way at the touch of button, revealing a couple of armrests for the remaining rear passengers, whose seats will slide backwards towards each other to create limo-like space. Extended footrests complete the sensation of luxury.

In the concept, tiltable three-piece electronically controlled headrests wrap around occupants' heads like pillows, although for safety reasons the one on the driver's seat can't be moved when the car is in motion.

Zafira Tourer
The concept is officially called the Zafira Tourer, and the aim has been to create 'a luxury lounge on wheels', according to General Motors Europe design director Mark Adams. A panoramic windscreen that stretches back over the roof of the car fills the cabin with light, a second pane is edge-lit by LEDs and tiny particles embedded in the upper trim glow in a variety of colours chosen by the driver.

The front seat backrests have pivot mounts for tablet PCs such as the Apple iPad, allowing passengers in the second row to surf the internet or control multimedia applications. There's space for a further iPad in a covered storage area in the front console. The exterior echoes the sculpted look Adams brought to the Insignia and Astra ranges.

The new Zafira is not scheduled to go on sale until next year, so it's too early to guess at the engine range or pricing, but because it is built on the same Delta platform that underpins the Astra range, it's not hard to guess where the mechanical bits will come from.