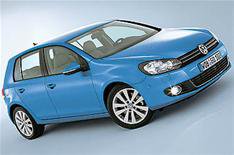 The new VW Golf will make its UK debut at a charity ball.

The organisers of the annual London Press Club Ball will reveal the car at their event on October 15 and then auction it to raise funds for the Journalists' Charity, which assists journalist, their partners or their dependents in need.

Among the guests at the ball, which is being held at the Natural History Museum, will be 450 of Britain's most influential journalists and PRs. The evening will be hosted by BBC presenter Jeremy Vine.

Ball committee chairman Philippa Kennedy said: 'It was a real coup to secure the next generation Volkswagen Golf as a prize. In the past we have had generous support from Audi, Honda and Peugeot providing cars as auction prizes.

'This is the first time we will have unveiled a prize car before it has even been officially launched in Britain. It's a great scoop for us and of course for whoever successfully bids for it. Those at the Ball will be among the first in the UK to see it up close.'

The charity auction is being conducted by Lord Dalmeny of Sothebys. Main sponsor is Barclays bank and the champagne reception is hosted by Camelot.