More for you |
New issue of What Car? magazine on sale nowPromoted | 5 reasons why it makes sense to go electric todayBig savings on our Car of the Year Awards winnersWhat Car? Awards 2021: The best cars you can buy2021 Nissan Qashqai: electric and hybrid power revealed
Home
News
Next Astra drop-top goes soft
news

* New Astra drop-top confirmed * Will have a fabric roof * Next Zafira will be more versatile... 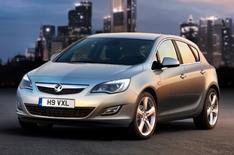 Sources at Vauxhall have confirmed that the company will launch a convertible version of the new Astra.

Our sources also revealed that the new drop-top will have a fabric roof, unlike the current Astra Twintop, which has a three-piece folding metal roof.

This should make the next Astra drop-top lighter and cheaper to produce. Prices and an on-sale date have yet to be confirmed.

New Zafira
Vauxhall insiders also hinted that the next Zafira which will be based on the new Astra hatchback due later this year will be more versatile than the current car.

The sliding central bench layout will remain, but the version on the new model is expected to be made up of separate sections to allow greater flexibility.