More for you |
What Car? Real Range: which electric car can go farthest in the real world?2020 Hyundai i20 small car revealed: price, specs and release dateRanked: The most reliable executive cars - and the leastFord Focus ST long-term test reviewCar recalls: what are they and what to do if your car is recalled
Home
News
Old versus new
news 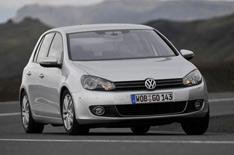 All six engines in the new Golf meet emissions standards not due in force for the best part of a year, and are up to 28% cleaner and more economical than those in the current car.

Some of the advanced electronics from the Passat CC (adaptive damping, crash-avoiding cruise control, self-parking and a rear-view camera) become Golf options, and there are upgrades to safety (seven airbags and improved stability control, belt activation and whiplash protection), refinement and quality, which had slipped in the Mk V.

The newcomer is shorter and wider than the car it replaces, and its proportions are slightly different, with less front overhang but more behind the rear wheels.

It uses largely the same platform and chassis as today's car: even the boot has been transplanted unaltered. It therefore remains a paragon of spaciousness and practicality, though ultimate versatility is slightly compromised by rear seats that don't fold flat.

There's one new petrol engine among the four on offer a 158bhp turbocharged and supercharged version of VW's 1.4-litre TSI unit while the two diesels are latest-generation 2.0-litre TDIs, delivering 108 or 138bhp.

The line-up is completed by a 120bhp 1.4 TSI turbo, a 79bhp 1.4 and a 101bhp 1.6. Twin-clutch DSG gearboxes, allowing manual or automatic shifting, will be available with most engines, but there's no conventional auto that would hurt economy and emissions.