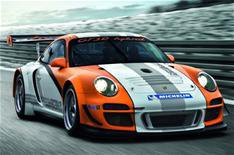 What is it
The hybrid technology has been developed for racing application, so two electric motors supplement the 480bhp 4.0-litre engine.

However, instead of the batteries you'd find in a hybrid road car, a generator powered by the car's flywheel delivers energy to the two electric motors.

Generating power
The generator is charged whenever the driver applies the brakes, at which point the electric motors stop delivering power in order to act as generators themselves.

Rather than braking energy being lost as heat, it is converted into power that can be used at a later time by the car's driver.

How it works - click here to enlargeThe extra power that's generated in during each charge process is available to the driver for around 6-8 seconds ideal for accelerating out of a bend or overtaking.

Car on test
After the Geneva motor show, Porsche will be testing the 911 GT3 R hybrid in long-distance races at the Nurburgring in Germany.

Porsche hopes that the car will act as a 'racing laboratory' to help develop future hybrid technology in road-going applications.

Porsche's first petrol-electric hybrid - the Lohner from 1900First Porsche hybrid for 110 years
The Porsche you see here at the Geneva motor show is not the company's first attempt at hybrid technology. Ferdinand Porsche first developed a vehicle with hybrid drive 110 years ago; the Lohner-Porsche. This had two combustion engines and an electric hub motor, and could store energy in a battery.