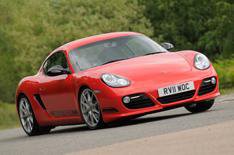 What is it? A lighter, more powerful version of the Cayman S. Theres also a bodykit to improve downforce decals and lightweight alloy wheels. It's also fair to say that no-ones going to buy the R for its creature comforts theres no air-conditioning, and you dont even get a stereo. What it does have, though, is a lower kerbweight than the Cayman S model its based on 55kg lighter to be exact and a more powerful engine.

Whats it like to drive? The R has the same 3.4-litre six-cylinder boxer engine as the S, and it has exactly the same 273lb ft torque output. However, its been retuned to give 325bhp, which is 9bhp more than the S. That doesnt sound like a vast difference, but you certainly feel the extra thrust. Nailing the throttle away from the mark results in a blistering surge of pace accompanied by a loud, throaty bellow from the exhaust.

The numbers support the Rs superiority, with a 0-62mph sprint time (5.0sec) that shaves two tenths off the Ss best effort. Itll also keep going until you hit 175mph, while the S tops out at 172mph.

Even more impressive than its pace, though, is the way that the R munches through corners. With its reduced weight, lowered suspension and mid-engined layout, the R changes direction with incredible agility and balance. Its helped further by a limited-slip differential that provides mammoth traction, and by steering that always keeps you informed about how youre doing on both counts. The steering is also quick, deadly accurate and beautifully weighted, while the throttle responses are crisp, the brakes are mighty and the short-throw gearshift is satisfyingly snappy.

The hardcore cornering ability isnt accompanied by a hardcore ride. The suspension is quite supple, so its surprisingly forgiving in town, and comfortable and settled on the motorway.

Whats it like inside? It has to be said, pretty sparse. Theres a big gaping hole where the stereo would normally be, and with few other toys, youll see lots of blank buttons on the dashboard. The door handles have gone the same way as the stereo, being replaced by bits of red ribbon.

That said, the build quality and materials are up to the same high standard you get from all Porsches, the driving position is fantastic, and with two boots (one behind the engine and one under the bonnet), you get a surprising amount of luggage space.

Should I buy one? That depends on how dedicated you are to the idea of ultimate performance, and more importantly, how much youre prepared to pay for it. Yes, the Cayman R is a better, more enjoyable car to drive than the Cayman S, but the S really isnt far behind, and you dont have to live without basic equipment. Choosing the S will save you around 4000, too, and thats why we think its the better bet for most people.