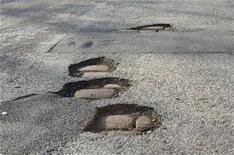 More than 600 million was spent on repairing 1.7 million potholes across England and Wales in 2011, a new report has revealed.

Other spending included 21.3 million paid out in compensation to drivers whose vehicles had been damaged by sub-standard roads, according to figures from the 17th Annual Local Authority Road Maintenance (ALARM) survey, which is carried out on behalf of the Asphalt Industry Alliance (AIA).

The Government has funded repairs with emergency payments totalling 300 million since 2010, but the report suggest that closer to 10 billion would be needed to restore all roads back to an acceptable condition. Currently, one in five roads has a residual life of less than five years.

According to the AIA, filling potholes is around 20 times more expensive than planned resurfacing of roads at regular intervals. Alan Mackenzie, chairman of the AIA said: These disastrous figures result from decades of underfunding and enforced short-term planning.

The ALARM survey which gathered data from 70% of local authority highways departments across England and Wales also suggests that it will take 11 years to clear the backlog of remedial work in England alone. The local authorities that supplied figures are responsible for 95% of the countrys road network.