More for you |
Every 5-star car on What Car?Used test: Maserati Levante vs Porsche MacanNew issue of What Car? magazine on sale nowMost and least reliable small SUVsRevealed: the car makers whose discounts have got bigger since lockdown
Home
News
Range Rover Evoque eD4 review
news 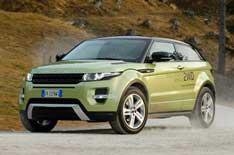 What is it? A front-wheel-drive version of the baby Range Rover.

Not long ago, a front-wheel-drive Range Rover, like this latest version of the Evoque, would have been unthinkable.

However, with rivals tripping over each other to offer cars with lower emissions and improved economy, it now seems like nothing more than common sense.

Whats it like to drive? With two fewer powered wheels and the absence of Land Rovers trick Terrain Response system, this two-wheel-drive version wont cope with challenging conditions in the same effortless manner as four-wheel-drive Evoques.

Its still capable of mild off-roading, because the stability control has been re-tuned to take into account the comparative shortage of traction, so you can floor the accelerator pedal and the electronics will do their best to compensate.

This comes in handy in snowy conditions, and it also means you dont have to worry about spinning the front wheels when pulling out of a slippery T junction.

The engine itself feels strong at low revs, so you rarely have to reach for a lower gear to keep up with the flow of traffic or climb an incline. However, work it harder, as you do when trying to overtake, and it quickly runs out of puff.

While four-wheel-drive Evoques strike a good balance between comfort and control, this front-driver thumps a bit more over bumps and feels less settled at all speeds.

Whats it like inside? When a car looks this good youll forgive it a lot, but those slinky lines take their toll on day-to-day usability.

Visibility is certainly compromised, and its especially bad when negotiating tight hairpin bends thanks to those huge door mirrors. The view out of those tiny rear windows is pretty poor, too.

At least theres plenty of room for four six-footers inside, although gaining access to the rear seats in the 3dr version is rather tricky. The boot is a little on the stingy side too, and the rear seats dont fold completely flat.

Still, at least the sports instruments and leather-covered dashboard look the part, while a large touch-screen gives you direct access to all the cars major infotainment functions.

Should I buy one? The biggest benefit of losing the four-wheel drive system is a weight saving of 75kg and the effect that has on fuel economy is not to be sniffed at.

The 148bhp 2.2-litre diesel model averages up to 58.0mpg, almost 8mpg more than the equivalent four-wheel-drive Evoque. Whats more, CO2 is down by 16g/km in the five-door car and 20g/km in the three-door, which is enough to drop them three and four company car tax bands respectively.

Yes, the equivalent four-wheel-drive car costs almost 1000 more and is pricier to run, but if you can afford it, it is money well spent.

A further 1000 buys you a more powerful, 187bhp engine, and this is also worth having if your budget will stretch, because it feels significantly stronger than the 148bhp unit.