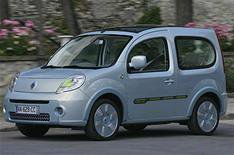 This Kangoo is a development of the Z.E. concept car seen at the Paris motor show.

This particular model won't be available for sale, or lease as with the Mini, but the majority of the electric powertrain will be used in a Kangoo, Megane saloon and bespoke city car from 2011, and a small family car design from 2012.

We probably won't get the Megane, but the others, Renault says, should cost the same as an equivalent model with an internal combustion engine. This does, however, rely on Government incentives, which remain a big 'if'.

There's also the issue of the batteries. Renault says it doesn't want motorists to worry about the disposal and re-use of the lithium-ion batteries, so it will lease them on top of the purchase price.

How much will they cost? Not decided yet, but Renault promises that once you pass 12,500km in a year (around 8000 miles), you'll start to save cash compared with pumping liquid fuel.

It takes six to eight hours to recharge through a household plug socket, but Renault says production cars will be able to be topped up quickly if you're suffering 'range anxiety' and they'll also be able to exploit any battery-swap infrastructure.

Renault says the battery and engine will be able to transport four people 100 miles with the air-conditioning on when the production models arrive in 2011. The Be Bop development car takes 13 seconds to go from 0-60mph and can go on to 80mph.