Replace child seats after an accident

* Renewed call during Child Safety Week * Even low-speed collisions can weaken seats * Many insurers will pay for replacement seat... 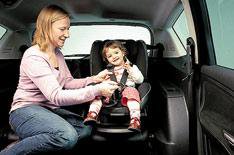 Parents must renew their child car seat after any collision, even if it's only a low-speed one.

That's the message from road safety charity Brake, which is trying to remind parents how important this is during Child Safety Week (23-29 June).

According to one survey, more than 20% of people believe they do not need to replace a child seat after a low-speed collision.

However, even though there may be no obvious signs that a child seat has been damaged, a crash can seriously undermine the structural integrity of a child seat.

One insurer, Direct Line, says the main reason parents give for not replacing a child seat after a crash is that they thought the speed at which the crash occurred was too low to warrant it.

The other reasons are:

• they didn't think they needed to;
• there was no apparent damage;
• they had it inspected but were told it was fine;
• their insurer wouldn't pay for it.

Many insurers will pay for a replacement seat, but you should check with your insurer to be sure.

The law requires that children have to use a child seat until they are either 135cm tall or 12 years old.