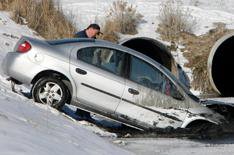 Road deaths have fallen to their lowest level since records began in 1928, according to figures released by the Department for Transport.

According to the statistics, factors in crashes involving younger drivers, particularly males, were more likely to relate to speed and behaviour.

Contributory factors in cases involving older drivers were more likely to be related to vision and judgement.

The government's data also showed there were 460 deaths when someone was driving while over the legal alcohol limit in 2007 - an 18% drop on the 2006 figure.