More for you |
New Volkswagen Golf vs used Volkswagen Golf: which is best?How can I sell my car safely during the coronavirus pandemic? Skoda Superb Estate iV plug-in hybrid long-term test reviewNew issue of What Car? magazine on sale nowMost efficient hybrid cars you can buy
Home
News
Scrappage scheme: have your say
news

Scrappage scheme: have your say

* Scrappage scheme announced * Tell us your views * Get in touch here... 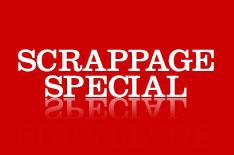 Chancellor Alistair Darling has announced a scrappage scheme in his Budget.

The scheme differs from what was widely expected, in that a 2000 scrappage incentive will be made up of a 1000 grant from the Government and a 1000 payment from car manufacturers who want to take part.

Tell us your thoughts by emailing us at whatcarpoll@haynet.com.

'Overall disappointing, considering the fact that most new prices have been creeping up. I would also expect dealer discounts to be less attractive. Most disappointing though is the fact that it hasn't been extended to the purchase of nearly new or 1 year old vehicles. I imagine that, like myself, most drivers of 10-year old cars, can't actually afford to buy a new car - that's why we drive bangers...'
Colin McNeilly

'Scrappage scheme is good news and I will be using it hopefully, but the MoT on my old car is due this month. Scheme appears to be only for cars/vans with a current MoT, where perhaps it should have been MoT up to 22nd April.That means I am MoT-ing a car that is going to be scrapped that's crazy.'
Simon Hall

'I was very excited about the car scrappage plan, thinking it an ideal chance to buy a new car. However, my Renault Clio's MOT runs out at the end of April and it is going to cost 600 to pass the next test. Therefore I would have to spend all that money on a car which isn't worth much more and then scrap it. Crazy!'
Marjorie Morrison

'I was all set to replace my wife's ten-year-old Renault with a new car, knowing that the extra 2000 would make the deal worthwhile. However as it was first registered 20th August 1999 it doesn't qualify!'
Paul, Aberdeen

'I am very much against the car scrappage scheme. The 1,000 manufacturers have to put in will have to come from reduced discounts elsewhere (or they would be losing money) so it's only going to add up to the 1,000 from the government and all cars with an MOT must be worth a few hundred anyway, so the value of the scheme is no more than a few hundred pounds. But as I am no fan of the idea of scrapping perfectly good cars for no good reason, I am happy the scheme is rubbish.'
Arthur Cobill

'The scrappage deal isnt worth a thing if the dealers can opt out. If I'm considering buying a new expensive petrol-drinking car because of the scrappage deal I dont think im going to have a 10-year-old car that needs scrapping. The deal should have been limited to low CO2 only cars.'
Mark Temple

'I have a car that qualifies, it is in fact 20+ years old, utterly reliable and goes through its MoT every year without fail. Although I would love to have a new car I am not going to put myself in several thousand pounds worth of debt for the privilege.'
Steven Trahearn

'Complete waste of time, even with the 2k incentive, I can get a better deal on a nearly new car. Can someone explain the point of the scheme & who in their right mind is going to take it up?'
Shaun Harrison

'I think the government have once again shown that they live in cloud cookoo land.

They fail to acknowledge that most people who drive older cars do so because they have no other choice. These people cannot afford to buy a newer model, either because they are students with very limited income or are from the lower paid section of the population but who need a car for basic transport (mainly to and from work).

These are the very people who could not afford a loan or could not get one, possibly because their job is only of temporary status or part time (most of the country is on a 4 day week or less at present).

Anyway anyone buying a new car at present can negotiate a good discount (bigger than the scrap allowance) by shopping around so long as they do not have a trade in or a car to scrap.
Is there not even a shred of common sense left at Westminster? I am reminded of Marie Antoinette "Let them eat cake!"