Is it possible to live with an electric car even if you can't charge it up at home? We're finding out with the help of the Skoda Enyaq electric SUV...

According to that wholly remarkable book, the Hitchhiker’s Guide To The Galaxy, 42 is the ultimate answer to life, the universe and everything. It also happens to be the number of remaining miles at which my Skoda Enyaq will ask its driver to find some electricity, pronto. 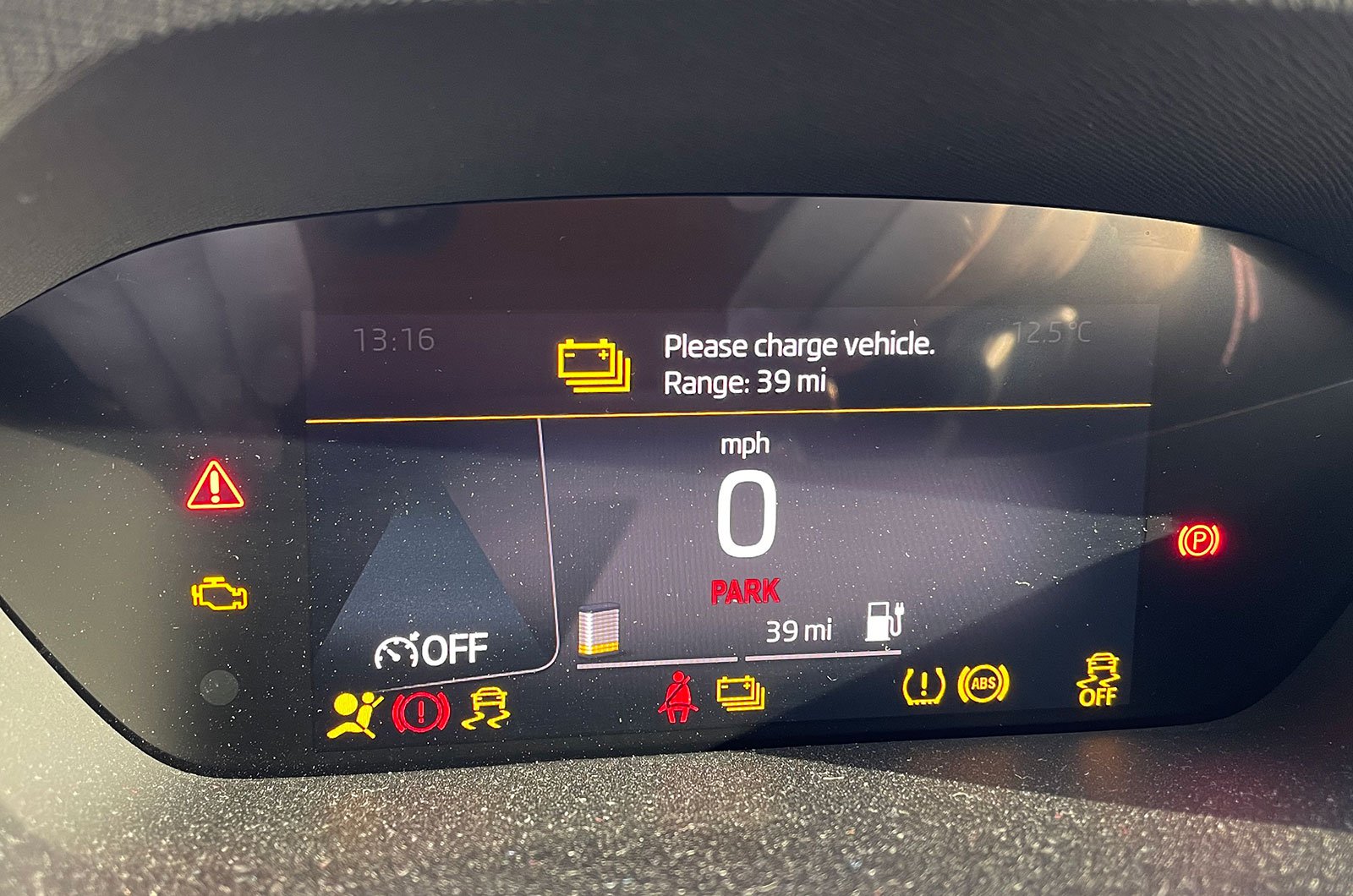 When this warning came on, I was driving down the M40 motorway headed for home, having been up to Bicester to oversee a video shoot for one of our Van of the Year winners. The modern look of my Enyaq offered a nice juxtaposition next to the rusting remants of the RAF base that once operated there, leading to the rather poignant image you see below, where the past and the future intersect.

I’d set out that morning with 158 miles of range – easily enough, in theory – to complete the 122-mile journey there and back to my home in Sunbury. Because of the cold weather, though, my range began falling faster than I’d expected, and so here I was, limping on to the next service station and the hope of some electrons for my battery.

When I’ve run petrol and diesel-engined cars in the past, Oxford services was one of my favourite stops, because it offers a scenic view and both a Burger King and a Krispy Kreme doughnut stand in the same building. As an electric car driver now, however, it’s dipped in my estimations, because it only has one 50kw fast-charging socket. 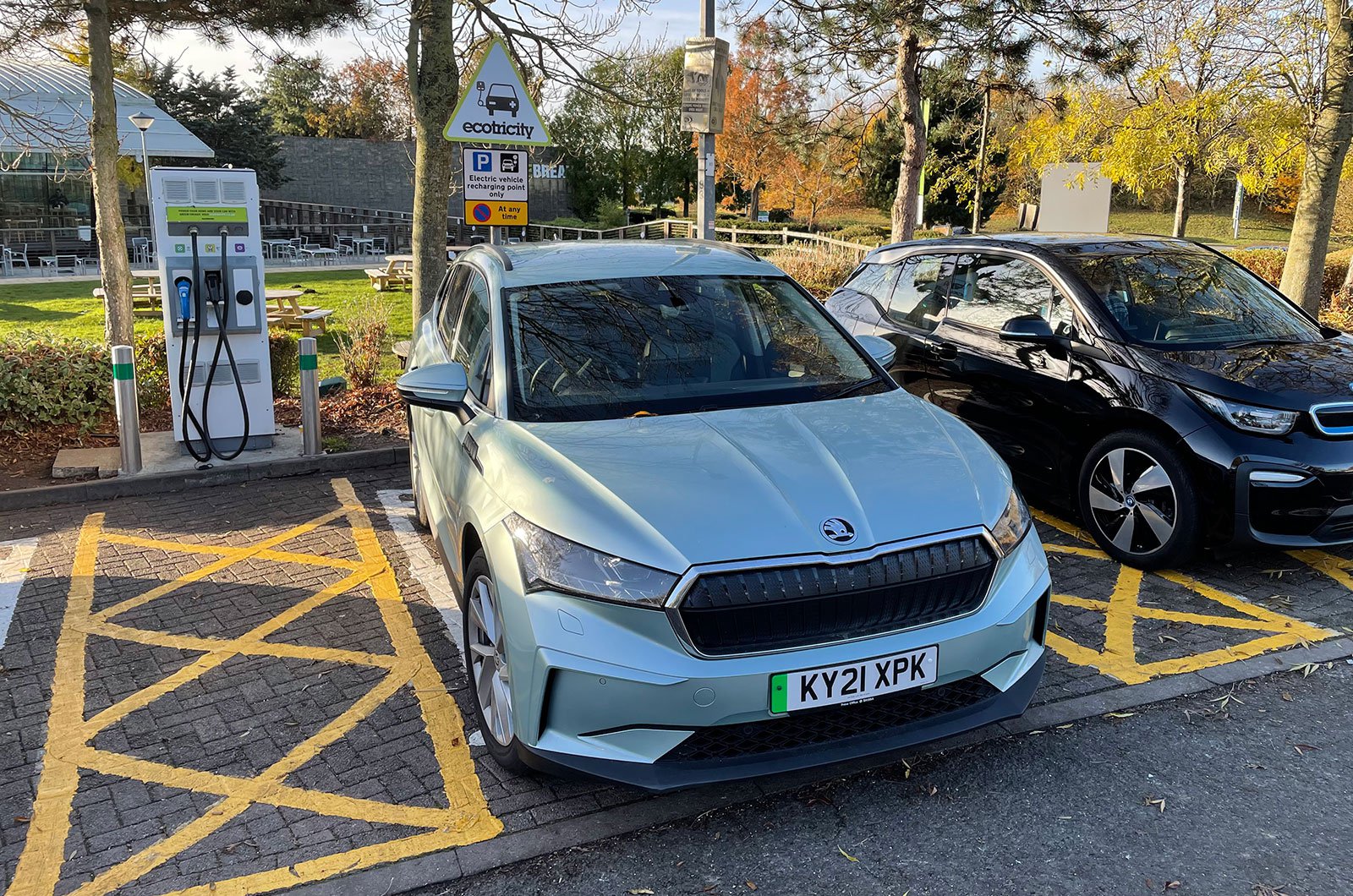 This would be fine, if said socket was free, but when I arrived a Mercedes EQC was charging up, and the owner of a silver Volvo XC40 Recharge was guarding its place in the queue with all the assertiveness of a dominant gorilla.

When the time came for my time to charge, I watched a succession of MG 5s, BMW i3s and even a Polestar 2 circle like sharks to see when I’d be finished, before claiming their place in the line. A couple of drivers even asked if they ‘could be next’, as if I had a magical clipboard to dictate who had next go.

The trouble with the increasing uptake of electric cars in the UK is that the infrastructure isn’t quite keeping pace, and while companies like BP, GeniePoint and Ionity all offer fast charging stations, the ones that you’ll find along the motorway network have a less than sterling reputation for reliability. Such sites now fall under the domain of Gridserve, which has promised to revamp all 300 of them, and for me it can’t come soon enough.

The Government wants as many of us as possible driving an electric car, and sure enough, earlier this year one-in-five new car buyers told What Car? they would be going electric with their next car. Of those who said they weren’t, though, range was cited as the biggest concern by 31% of respondents, so an ability to charge quickly and easily is paramount.

Now don’t get me wrong, I’m enjoying my Enyaq immensely. My running costs are way down compared with when I had a diesel-engined BMW 4 Series, and it’s more spacious than the Honda Jazz I had previously.

Trouble is, however much I’m enjoying the car, it’s been let down more than once by the public charging network – which, as someone who can’t charge at home, is an increasing source of frustration.