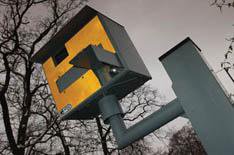 More than 100 million was raised through speed camera fines in 2006/7, according to the latest figures from the Department for Transport (DfT).

Motorists in London were hit the hardest, paying 7.5 million in fines. Drivers in Mid- and South Wales paid 5.9 million and those in the Thames Valley paid 4.5 million. In contrast, just 724,860 was raised in camera fines in Gloucestershire.

Any profit from the 104.4 million raised is kept by the 38 safety camera partnerships in England and Wales that administer the cameras.

However, the Department for Transport reported that operating costs accounted for all but 6.4 million of the fines. That's a drop from 15 million the previous year, when 114.6 million was collected in fines.

A DfT spokeswoman said: 'Safety cameras are there to save lives, not make money. Independent research has shown there are 1745 fewer deaths and serious injuries at camera sites each year.'

However, a spokesman for campaign group speedcameras.org said: 'According to the DfTs own figures, only 5% of all traffic accidents are caused by drivers exceeding the speed limit.

'Drivers without a licence, insurance or tax are four to five times more likely to be involved in an accident - they should be the top priority for the police.'