More for you |
Secrets of a paramedicWATCH: 2020 Polestar 2 review – better than a Tesla Model 3?Cars that are cheaper to buy on finance than with cashNew issue of What Car? magazine on sale nowBest used coupes for less than £10,000 (and the ones to avoid)
Home
News
Sub-100g/km Astra unveiled
news 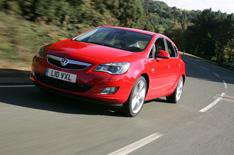 Vauxhall has unveiled the most economical version yet of its Astra hatchback.

The new Astra Ecoflex 1.7 CDTi 130 averages 76.3mpg and emits just 99g/km of CO2 20g/km less than the existing 1.7 CDTi models despite having 5bhp more than even the most powerful version.

That means it will be exempt from the London Congestion Charge, sit in the lowest company car tax band and qualify for zero road tax but still have decent performance.

All this comes courtesy of a host of changes to both the engine and the car. The 1.7-litre unit has a revised engine management system and plenty of improvements inside to make it run more efficiently, as well as stop-start and energy-recuperation systems. On top of that, the car runs on low-rolling-resistance tyres and incorporates a series of measures to improve its aerodynamics.

The new model will be available in Exclusiv, SE and SRi trims, and will reach Vauxhall showrooms late this year. Prices will be announced nearer the time.