Suzuki will be showing its Swift supermini with a plug-in hybrid system at the Geneva motor show in March.

We first saw the car at the Tokyo motor show last October.

Designed for drivers who travel low mileages, the car combines electric power with a 660cc petrol engine as back up.

A range of up to 12 miles on electric power alone will help keep emissions low.

The car can be recharged using a domestic plug socket, while an on-board generator charges the batteries when the power level drops.

Also on Suzuki's stand at Geneva
The Suzuki Kizashi will be on display at the Geneva motor showSuzuki's new flagship Kizashi saloon will also make its European debut at the Geneva show.

Powered by a 2.4-litre petrol engine, it has a CVT transmission and four-wheel drive as standard.

There are no plans to launch the car in the UK at this stage.

A new-look Grand Vitara will also be on show now without a spare wheel on the tailgate to make it more suitable for city driving. This model will go on sale in the UK in July. 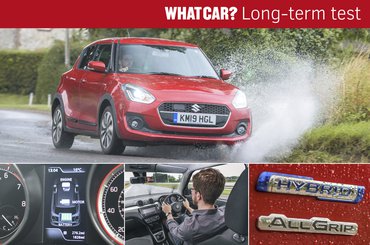