More for you |
All the electric cars coming soonHow to spec a Jaguar XEShould I still buy my new electric car? 2021 Suzuki Across large SUV revealed: price, specs and release dateBest used family SUVs for less than £15,000
Home
News
The cleanest Land Rover ever
news

The cleanest Land Rover ever 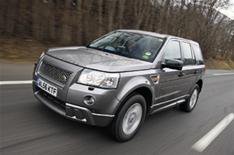 Land Rover has unveiled the most fuel efficient vehicle it has ever made at the Paris motor show.

The Stop-Start function only operates when the vehicle is stationary, the gearbox is in neutral and the driver lifts off the clutch. The engine restarts when the driver presses the clutch.

Although drivers can switch the system off, Land Rover has fitted an auxiliary water pump in order to keep the air-con working when the engine is off.

The system reduces carbon dioxide emissions by 8% compared to the outgoing manual diesel Freelander, which equates to 15g/km or 179g/km compared to 194g/km.

Fuel economy is improved by up to 20% in heavy urban traffic, with average fuel consumption rising from 37.66mpg to 41.54mpg.

Other technology incorporated to improve efficiency include a gear change warning light, a remapped ECU and low-rolling-resistance tyres.

The system will be incorporated on all Freelander 2 TD4 manual models from mid-2009, with Land Rover pledging not to increase list prices.