More for you |
Every 5-star car on What Car?Used test: Maserati Levante vs Porsche MacanNew issue of What Car? magazine on sale nowMost and least reliable small SUVsRevealed: the car makers whose discounts have got bigger since lockdown
Home
News
UK's first fast-charge points open
news

* New charging points in Camden * Free to use from today * More fast-charge points to come... 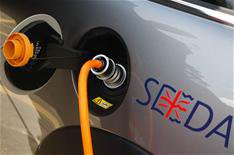 The UK's first fast-recharging points for electric vehicles have opened in Camden today.

The three high-power chargers are free to use and can nearly halve the recharging time for electric vehicles because they provide nearly twice the output of a domestic plug socket. Charging the batteries in a Nissan Leaf would be cut from eight hours to just four.

The bays have been installed by Elektromotive for Camden Council at its bus depot. The bays are part of Camden Council's drive to be the first local authority with a fleet of electric vehicles. The bays will get some of their electricity from roof-top solar panels.

Elektromotive says it will install more three-phase charging points in the UK from early next year.

For more information about using the Camden points, visit the council's website.