More for you |
Coming soon: new cars worth waiting forWhat are our rights regarding Mini with blown engine? MG ZS EV long-term test reviewEvery 5-star car on What Car?How to spec a Peugeot 5008
Home
News
Unsafe tyres on 50% of cars
news

Unsafe tyres on 50% of cars 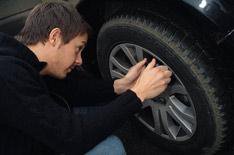 Almost half of drivers risk losing their licences because their car tyres are illegally worn, according to a tyre audit conducted by HiQ

The results are significantly up from the fast fit network's last audit in 2009, when a quarter of the tyres it checked were illegal.

The most culprits were in the Birmingham, the north east and Cheshire areas.

HiQ, which is offering free tyre safety checks until the end of 2011, has responded with its new '1-2-3' campaign.

It pitches the following messages about the dangers of worn tyres:

1 Just one worn tyre could cost you 2500 in fines
2 With worn tyres, stopping distances in the wet could be increased by two car lengths
3 Each tyre with a tread depth of less than 1.6mm is worth three penalty points

Farrell Dolan, HiQ's retail development manager, said: 'To say we were shocked by our audit results is an understatement. We were staggered that thousands of motorists are sitting on an automotive time bomb.

'Some vehicles we checked had three or even four defective tyres, which would amount to 12 penalty points and up to 10,000 in fines.'

The legal tread depth limit for tyres is 1.6mm but you should always change tyres when the tread depth reaches 3mm, because tyre performance falls significantly after this.