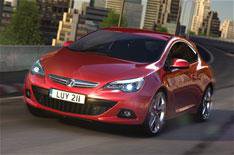 Order books will open for this sporty Astra GTC in June ahead of the three-door Vauxhall going on sale later this year.

The Astra GTC is based on the GTC Paris concept car revealed at the Paris motor show last September.

Vauxhall says pricing, equipment and engines will be revealed on June 7 - when it will begin taking orders for the GTC. First deliveries are expected in late autumn.

The engine line-up is expected to resemble the five-door's, although the chassis will be significantly changed. There are also rumours that the hot VXR version of the GTC will have 300bhp when it goes on sale shortly after the standard models.

The car will be officially launched at the Frankfurt motor show in in September.