Vauxhall Corsa vs Hyundai i20

* Is scrappage best for you? * We work out the figures * Old cars take on new... 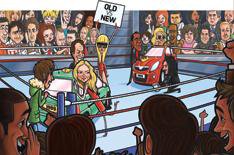 See how these old and new cars square up in the scrappage battle. Check below to see if your car qualifies for the Government's scrappage scheme.

Does your car qualify for scrappage?
The Government has set aside another 100 million for the scrappage scheme. That's enough for 100,000 cars, so get in quick. The latest the scheme can run until is February 28, 2010 and your old car must meet the following criteria:

• First registration was before February 29, 2000
• You must be the registered keeper and have owned the car for at least 12 months
• It must be taxed and have a valid MoT certificate
• There must be no outstanding finance

Pete is happy with the size of his Corsa safety is the main reason he wants something more modern for his family. He often travels with four people, so doesn't want anything underpowered, but his budget is tight. We suggested the Hyundai i20 1.4 Comfort 5dr.

The i20 has been hugely popular under the scrappage scheme because it's such great value for money. It's also one of the safest superminis. Unsurprisingly, it has a better Euro NCAP crash test rating and more airbags than Pete's Corsa, plus it's far more likely to avoid a crash, thanks to standard stability control.

It also stopped from 70mph more than 12m earlier than the Corsa in our tests.
There's only a whisker in it for performance, but the i20 would save the Browns 650 on petrol. Some of that money would need to be spent on higher insurance bills, and the i20 would cost 229 more to service, too.

The RAC inspection wasn't a horror story, but highlighted several issues that needed to be sorted - including replacing a seatbelt pre-tensioner.