More for you |
New issue of What Car? magazine on sale nowBest used city cars for less than £2000 (and the ones to avoid)UK car sales fall to worst level on record due to coronavirus lockdownBest used small cars The 10 most popular cars in the UK revealed
Home
News
Vauxhall Corsa VXR Nurburgring review
news 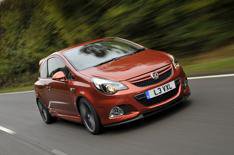 What is it? A faster, more focused version of Vauxhalls Corsa VXR hot hatch and this is the first time we've driven it in the UK.

It's a limited-edition model, although Vauxhall hasn't confirmed how many will be made.

To help the VXR Nurburgring make the most of its extra firepower, Vauxhall has fitted a traction-enhancing limited-slip differential. This is complemented by new springs and shock absorbers, a lowered ride height and lightweight Brembo brakes.

Whats it like to drive? Drive the regular VXR hard out of a slow corner and you're likely to be rewarded with a wildly spinning inside front wheel, however the Nurburgring Edition's extra power and torque is easily contained by the limited-slip differential.

The car is grippy and rapid through faster corners, too; body movements are tightly controlled, and the steering is sharp and consistent, but quite short on feel.

However, the pay-off for this is an overly firm ride, with every bump and scar in the road surface slamming through the cabin.

Noise is also an issue, but sadly not from the wide-bore twin exhausts. They look like they mean business, but are disappointingly muted and civilised. Instead, its the low-profile tyres that are the culprits, generating a din on most road surfaces.

Whats it like inside? The cabin is standard VXR, except for some Nurburgring adornments to the centre console and door sills. The dashboard, switches and controls all look and feel perfectly acceptable in a standard Corsa, but they dont feel special enough here.

At least its easy to set the driving position up to suit your frame, with plenty of adjustment for the seats and the steering wheel.

Our test car came with heated buckets seats that were both comfortable and supportive, but did nothing to set the Nurburgring apart from the regular VXR theyre a 1045 option on both models.

Should I buy one? The VXR Nurburgring offers plenty of driving thrills, but they don't come cheap, and thats where the biggest problem lies.

At 3395 more than the regular Corsa VXR and more than 5000 dearer than a Renaultsport Clio Cup, its just too expensive. Even our hot hatch of the year, the 247bhp Renaultsport Megane Cup, is just 1725 more.

The VXR Nurburgring is a blast to drive, and will collect plenty of envious stares, but we think there are better ways to spend this much money. Its great fun to drive, but too tiresome to live with, and too costly to buy and run.