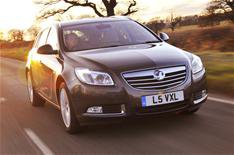 The Ecoflex diesel model has a 128bhp 2.0-litre engine and, for the first time in an Insignia, stop-start technology. It has also been given aerodynamic tweaks and low-rolling-resistance tyres. These which help contribute to the car's emissions of 115g/km and an expected average economy of 63mpg.

Both versions are available to order now.