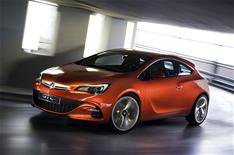 Vauxhall has revealed more photographs of its GTC Paris concept car, which will be unveiled at the Paris motor show next week.

'We wanted to put a touch of premiumness into the Astra that oozes German precision into our brand values, ' said Adams. 'We have a clear plan for what we stand for and where we are going.'

Adams said the forthcoming electric Ampera family car shows Vauxhall's environmental aspirations and these were pushed to the extreme with the GT/E concept car at the Geneva motor show earlier this year.

Similarly, Vauxhall says the five-door Astra typifies its sporty values and these values will be pushed to the extreme with the GTC Paris.

'The GTC is stretching boundaries,' said Adams, 'typifying the extreme element of sportiness.'

If rumours of the VXR version of the GTC Paris are correct, the sportiness boundary will be pushed even further it's thought the car will have 300bhp when it goes on sale shortly after the standard three-door Astra arrives at the end of the year.

However, Adams says practicality isn't sacrificed in the GTC Paris. 'The car looks like a coupe, a 2+2, but it is a five-seater vehicle.'

Future designs
Some manufacturers make vehicles where the smaller cars in the range look just like shrunken version of bigger cars, although this isn't an approach that Vauxhall will take.

'There will be a consistent Vauxhall feeling,' said Adams, 'but we wont' take a Russian doll approach.'