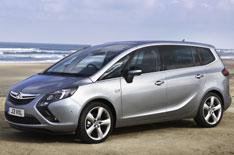 • New MPV on sale in November
• Starting price of 21,000
• Range of petrol and diesel engines

Vauxhall's Zafira Tourer will go on sale in November from 21,000.

Launching the production version of the car at the Frankfurt motor show today, Vauxhall confirmed the S-Max rival will have a new 1.4 turbo petrol, a 1.8 petrol with a range of power outputs and a new 2.0 CDTi diesel with three outputs. Vauxhall says certain petrol and diesel engines will come with Start-Stop.

The car will be offered in five trims ES, Exclusiv, SRi, SE and Elite and all versions will come with air-con, DAB radio, cruise control, six airbags, active headrests and a seven-speaker stereo.

The car uses the Flex7 seating system of the current Zafira, which will continue to be sold alongside the new Zafira Tourer.