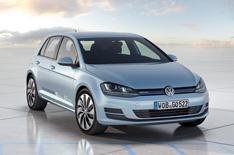 The Volkswagen Golf has won the European Car of the Year award for 2013. This is the most efficient model yet.

Weight savings, engine modifications and styling tweaks all work together to lower fuel consumption and emissions. The Golf Bluemotion returns 88.3mpg on the combined cycle and emits 85g/km of CO2 - a 15% reduction on the previous generation car.

The running gear has lost 26kg while the body has shed 37kg. Volkswagen has fitted super low rolling resistance tyres to lower friction.

The 1.6-litre, four-cylinder diesel engine produces 109bhp and is connected to a five-speed manual gearbox that now has longer gear ratios. The engine is faster to reach optimal temperature and two catalytic converters and a diesel particulate filter help to lower emissions.

The Golf Bluemotion will be available to order in May with first deliveries to the UK in August. Full specification and pricing will be confirmed nearer the on sale date. We expect a price of about 20,000.