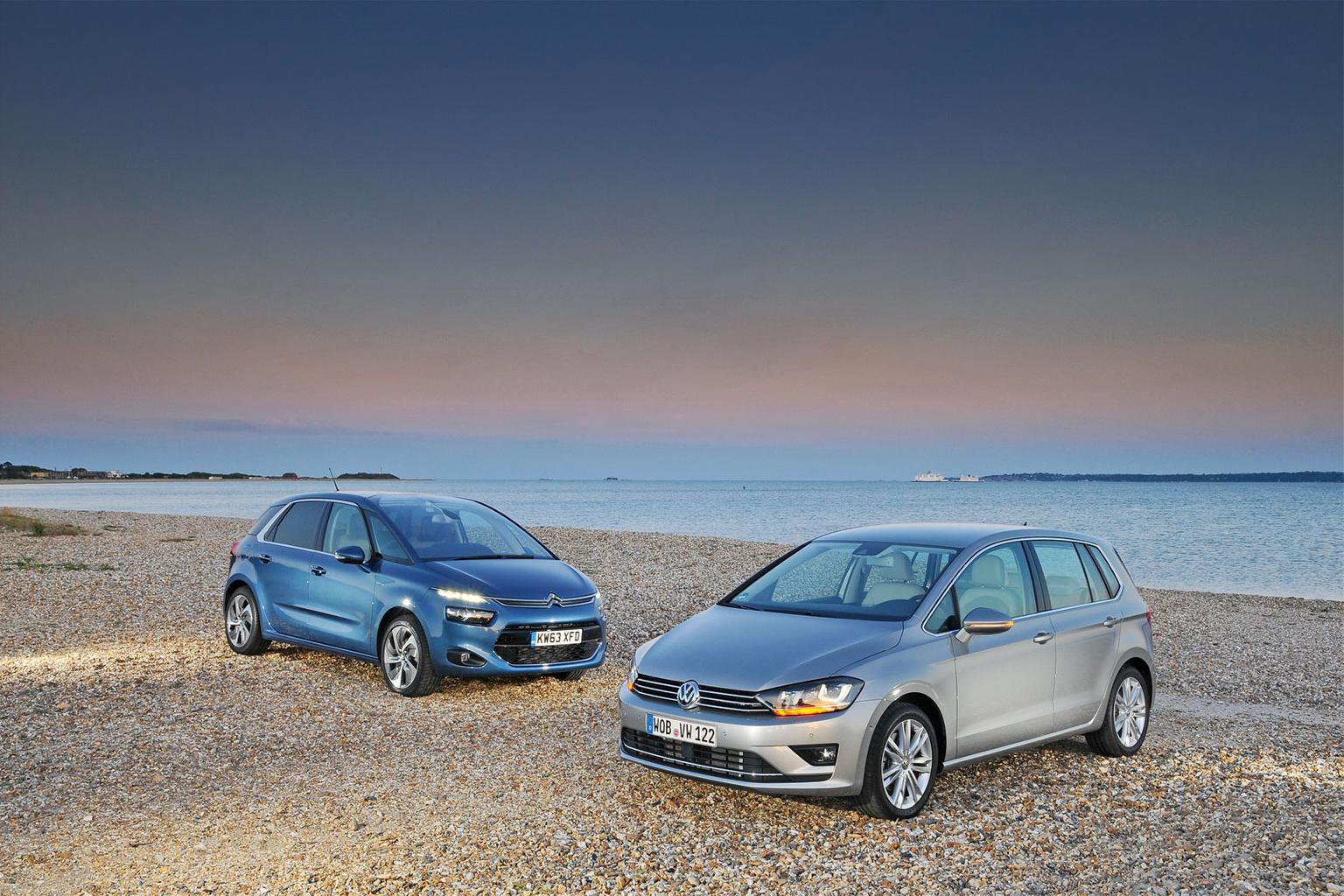 Growing families can quickly stretch a conventional five-door hatchback beyond its limits, so what’s the best alternative once they do? Traditional MPVs should be the answer, but their spacious interiors often mean buying a much bigger, heavier car, with all the sacrifices that entails.

The new Golf SV is meant to solve this problem by offering a big boost in practicality, while keeping all the best bits of the standard car intact. To find out if it’s a better solution than a conventional five-seat MPV, we’re testing it against the excellent Citroen C4 Picasso.

MPV buyers are looking for far more than just a big boot, so it’s a good thing that both of these cars have rear seats that slide, recline and fold, allowing you to trade rear legroom for more boot space.

However, the Citroen has three individual rear seats, making it the better choice for anyone who needs to fit three child seats across the back row. The flat floor is another bonus, because it makes life more comfortable for the middle rear passenger, whereas in the Volkswagen they’ll have to straddle the
raised tunnel that runs down the centre of the floor.

However, the Golf SV’s rear seats are mounted lower to the floor and are steeply reclined, both of which help give it nearly 10cm more headroom, while legroom is also more generous.

When it comes to boot space, though, the C4 Picasso is streets ahead. Its load bay is longer, wider and deeper than the Golf SV’s, with a lower lip and an almost totally flat floor. The standard electric tailgate opens at the touch of a button, and a set of clever flaps fitted to the seat backs ensure you always have an even surface to load your luggage onto – even when the seats are folded.

The Golf has a height-adjustable boot floor, but changing between the two positions is an awkward manoeuvre because you first have to remove a divider. The seats lie at a slight angle when folded, too, and a front passenger seat that folds flat is a £160 option, whereas it’s standard in the C4 Picasso.

You sit higher up in the Citroen than in the Volkswagen, and the tall windscreen and huge expanse of glass means forward visibility is slightly better. However, the Golf SV counters with classier materials throughout and comfier, more supportive seats, while its infotainment system is also easier to use, with simpler menus and more user-friendly shortcut buttons. By contrast, the C4 Picasso’s 7.0-inch touch-screen is fiddly and slow to respond.

Both contenders have 2.0-litre diesel engines that produce an identical 148bhp. The Golf SV is the faster car, though; it sprinted from 30-70mph almost a second quicker than the C4 Picasso in our tests, and it also picks up speed more briskly from low revs, so you don’t need to change down as often when driving around town.

The C4 Picasso is far from slow, although its engine is flatter at both low and high revs, and much coarser and noisier than the Golf SV’s. That said, the C4 Picasso actually generates less wind and road noise at a steady motorway cruise.

However, its jittery low-speed ride is frustrating. The Picasso also rolls more through corners, absorbing gentle crests and dips nicely, but then crashing over ridges and potholes that the Golf SV simply glides over.

Our test Golf SV came fitted with optional (£815) adaptive suspension, but past experience with the standard hatch suggests it would still corner and ride better than its rival even without this extra.

The Citroen’s fingertip-light steering makes it easier to park and manoeuvre at low speeds, but the limited feedback and slow responses inspire little confidence when driving faster.

Meanwhile, the VW’s steering is more precise, and its six-speed ’box is more positive.

What will they cost you?

The C4 Picasso is a little cheaper for company car drivers because its lower CO2 output qualifies it for cheaper monthly tax bills; as a 40% rate taxpayer you’ll need to fork out an extra £300 over three years for the Golf SV.

A generous amount of standard kit also works in the Citroen’s favour. In fact, there’s really no need to add any options at all because, in Exclusive+ trim, the C4 Picasso already gets luxuries such as massaging leather seats, a panoramic glass sunroof, powered tailgate, a self-parking system and sat-nav.

The Golf SV hardly scrimps on equipment either because, like the Citroen, it has climate control and satellite-navigation fitted as standard. However, leather upholstery costs more than £1000 extra, while a sunroof adds £920.

More important for private buyers, though, the VW’s stronger resale values mean that it will be worth more when the time comes to sell; it’s predicted to hold on to £700 more of its value during the first three years. As for fuel economy, both cars managed an impressive 55mpg in our real-world True MPG tests.

Both cars were awarded maximum five-star ratings from crash test body Euro NCAP and come with sophisticated driving aids including adaptive cruise control. The Golf SV also comes with blind spot sensors and automatic braking to help avoid collisions at low speeds, plus a driver-alert system, which sounds a warning when it thinks you’re getting tired.

Both are very similar in purpose, but excel in very different areas. If you have a young family, the Citroen is the better choice, thanks to its more flexible cabin and enormous boot.

However, if you have older kids or regularly carry four adults, the Golf SV is the one to go for. It has lots more room in the back than the Citroen, is much the better to drive and is the cheaper if you’re a private buyer. Couple that with its more comfortable ride and classier interior, and the VW just snatches the win.

Verdict Trumps the SV for boot space and useability