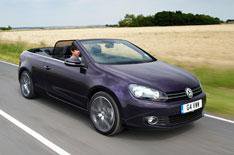 This is the most powerful petrol version of the new Golf Cabriolet. It has a 158bhp 1.4-litre engine with a turbocharger and a supercharger. Its available in sporty GT trim only, with either a six-speed manual or seven-speed DSG semi-auto gearbox.

We reckon this is the sweet spot in the Golf Cabriolet range.

The 1.2 TSI petrol version is commendably cheap to own, but with just 103bhp its rather slow. The same goes for the 1.6 TDI diesel, which has the same output and is also on the noisy side.

Above all, an open-top car should be fun, and in its 1.4 TSI 160 guise the Golf Cabriolet is just that. GT trim includes suspension thats 15mm lower than S or SE models and it suits the car well. Body control is also better; whereas S and SE models are rather stodgy, the GT feels more responsive and has better poise. Theres little compromise on comfort, either, because the ride remains generally supple and forgiving.

The steering is well weighted, and the gearshift on the manual version we drove is slick.

The 1.4 TSI engine is a good match for the Golf Cabriolet, too. Its flexible and refined, providing plenty of oomph from the off. Although its not hot-hatch quick, performance is strong. VW quotes a 0-62mph time of 8.4 seconds; 3.3 seconds quicker than the 1.2 TSI and 3.7 quicker than the 1.6 TDI.

Apart from the electric roof switch between the front seats, the Cabriolets interior is just like any other Golfs, which is a good thing. Build quality is impeccable, the materials are a match for many pricier cars and everything works with well-engineered precision.

If theres a fault, its that the interior design is fairly unimaginative, but the upside is that everything is clearly laid out and easy to use. There are a few visual treats on GT models, too, including part-Alcantara seat upholstery and leather trim for the steering wheel, gearknob and handbrake grip.

The Golf Cabriolets cloth roof is one of the best around: it does a great job of blocking out noise and takes just nine seconds to lower and 11 to raise, both of which can be done on the move, at low speed.

Should I buy one?If youre after a classy, four-seat convertible, the Golf Cabriolet ought to be at or very near the top of your list.

At £25,295 its not cheap, but this model is the pick of the range, with a strong engine and lots of standard kit, including front and rear parking sensors, climate control, automatic headlights and wipers, Bluetooth and front sports seats.

Running costs insurance premium apart shouldnt be much higher than for the 1.2 TSI, either. Average fuel consumption of 44.1mpg is just 3.8mpg shy of the 1.2s.

The toughest competition apart from VWs own Eos - comes from the Audi A3 Cabriolet, which is closely related to the Golf and has an almost-identical roof. The cheapest A3 Cabriolet 1.8 TFSI model which also has a 158bhp petrol engine starts at £23,825, but Sport trim starts at £25,715. Choosing between them is tough these are the best two cars in this class, so its largely a case of which you prefer the look of.