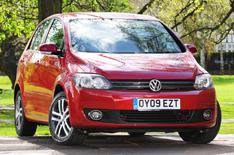 Volkswagen's Golf Plus now has an average fuel economy of over 65mpg, thanks to the addition of Bluemotion technology.

The Golf's standard 1.6-litre diesel engine has been given the Bluemotion's economy-boosting and emission-cutting treatment, which includes:

The Golf Plus Bluemotion comes in the same trim levels as any Golf Plus S or SE.