More for you |
Best luxury SUV dealsCar market begins to recover in JuneDo I have to pay extra road tax on my new car? True MPG: most and least efficient cars revealedConfessions of an AA technician
Home
News
VW's Golf gets Blue-e-motion
news 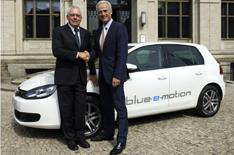 Volkswagen has revealed the Golf Blue-e-motion, an all-electric version that will go on sale in 2013.

The Golf Blue-e-motion will follow on from a Touareg hybrid, which goes on sale in the summer, and a hybrid Jetta in 2012.

Hybrid versions of the Passat and Golf will also join the range in 2013.

Volkswagen Blue-e-motion
The first of Volkswagen's all-electric vehicles will go on sale in 2013, in the form of the Up Blue-e-motion, closely followed by Golf and Jetta blue-e-motion.

The Golf version will use a 113bhp electric motor powered by lithium-ion batteries.

Accelerating from 0-62mph in 11.8 seconds, the Golf Blue-e-motion will be capable of 86mph, with a range of up to 90 miles between charges.

A fleet of 500 prototype Golf Blue-e-motion cars will begin testing in real-world conditions in 2011. Full production will begin in 2013.