More for you |
Can I travel more than 100 miles to collect a car during lockdown?Audi Q5 long-term test reviewShould I buy winter tyres?Most (and least) reliable family carsWhat Car?'s top tips for driving in winter
Home
News
White cars are 'most stolen'
news

White cars are 'most stolen'

* White is favourite among thieves * Black and silver are next * Most cars are stolen on Mondays... 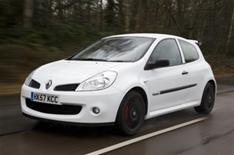 If you own a white car, be careful where you park it on a Monday.

That's because white cars are the most likely to be stolen, and thefts peak on Mondays, according to a report by the RAC Foundation and Retainagroup.

White cars are said to be more at risk because white paint is non-metallic and is easier to disguise through re-spraying.

Black and silver cars were second and third in the list, although this may be down to the fact that they are the most popular car colours, and so there are more of them to steal.

The analysis also revealed that the risk of having your car stolen is one third less on a Sunday than on a Monday.

However, there is some dispute over whether the Monday peak is simply down to the fact that many motorists do not discover their car has been stolen until they get up for work, and their car may have been stolen over the weekend.