What used Porsche Cayman coupe will I get for my budget?

How much does it cost to run a Porsche Cayman coupe?

The 2.0 Cayman is the most economical, not surprisingly, with an official WLTP figure of 32.8mpg, although if you enjoy the car as much as you should you’ll probably not see anywhere near that in the real world. Its CO2 emissions, according to the older NEDC tests, is 186g/km. Naturally, the GTS and GT4 won't see much over 20mpg in everyday use.

Tax for cars registered before April 2017 will be based on CO2 emissions and will be fairly high, while cars registered after that date will pay a flat rate, currently £145 a year. However, all Caymans cost over £40,000 new, and as such are subject to a luxury car supplementary tax, currently £320 a year.

Insurance groups are high, too, ranging from 44 for the 2.0-litre car up to 49 for the GTS. Servicing will be expensive, and is best carried out by proper Porsche specialists. Some garages operate a fixed-price servicing plan, with costs for a minor service starting at £485 for a Cayman. 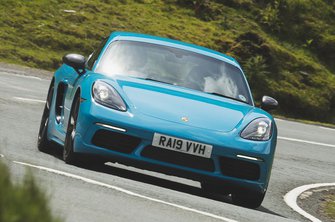