What used Renault Megane estate will I get for my budget?

Around £12,000 is the starting point for this generation of Mégane Sport Tourer. This will get you a late 2016 model with an average mileage for the year and a full history, from a trader or an independent dealer. Step up to between £13,000 and £15,000 and you’ll find 2017 models satisfying the same criteria, while around £18,000 gets you into the territory of nearly new cars from franchised dealers.

How much does it cost to run a Renault Megane estate?

The 1.5 dCi 110 diesel is the most economical engine in the range, with a claimed average fuel consumption of 76.4mpg in some trims, corresponding to a CO2 emissions figure of just 96g/km. The best-performing petrol in this respect is the 1.2 TCe 130, which claims an average of 52.3mpg.

Annual car tax will be low for all cars registered before the tax changes of April 2017, but those registered after that date will pay the flat rate charge – currently £140 per year.

Insurance groupings are good for all versions of the Sport Tourer, ranging from group 14 up to 27 for the sporty petrol-engined model.

Renault’s standard warranty is three years and 60,000 miles. When the time comes for servicing, costs should be reasonable. Minor services (which should be carried out every 12 months or 10,000 miles ) cost from £140 for petrols and £190 for diesels. 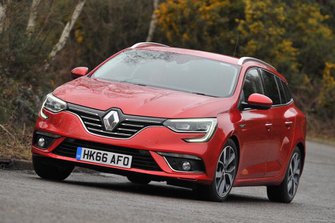