Which used Saab 9-3 sports should I buy?

Originally, three turbocharged petrol engines were introduced: a 1.8-litre with 150bhp and two 2.0-litres, with 175bhp and 210bhp. These were later joined by a 2.3-litre V6 with 247bhp and a 1.9-litre TiD diesel with 150bhp. The most powerful petrols come with a six-speed manual 'box.

The less powerful petrols suit the car's chassis well, considering its limits of grip, while the V6 and diesel versions work well with the optional five-speed automatic gearbox.

The 9-3 Convertible received the maximum five-star rating in Euro NCAP's crash tests and all models have twin front and side airbags, anti-lock brakes and a roll-over bar behind the rear seats.

All 9-3 Convertibles have a electric roof, which neatly folds into the boot. Base models have air-con, electric windows, a CD player, electric heated mirrors and alloy wheels. Vector and Aero models have climate and cruise control with leather. 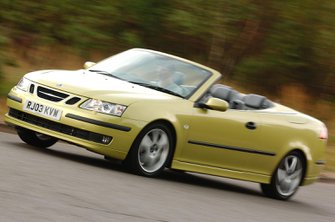