Which used Subaru Impreza saloon should I buy?

In 1998, the Impreza went through its biggest change since it arrived in the UK five years earlier. This included a completely revised interior, with the addition of a standard passenger airbag, new seats and a Momo steering wheel. Power still came from a 2.0-litre turbocharged petrol engine, however.

There were more tweaks each year as the Impreza evolved to reach cult status in the UK. A host of special-edition cars were also launched, including the P1 and RB5 in 1999. In late 2000, a front-end makeover resulted in the much-criticised Ôbug-eyed' model, and at the same time the Turbo name was dumped in favour of WRX. A redesign 12 months later created another new nose, and more annual revisions have followed.

If you're not interested in outrageous performance, the 2.0-litre R is the base model, and performs well. It will still hit 60mph in 8.5 seconds. 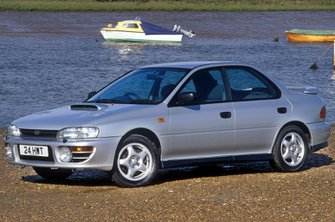