What used Subaru Justy hatchback will I get for my budget?

How much does it cost to run a Subaru Justy hatchback?

In comparison with similar cars of the day, it is expensive to run. Four-wheel drive never comes cheap, even when it's in a car as small as this.

The Suzuki Swift, for example, is mechanically identical to the Justy, apart from the four-wheel drive. The big difference is that you can pick up a Swift much, much cheaper than you can a Justy.

The extra weight of all that gear also has a big impact on fuel economy. Where the Swift returns a very reasonable average of 47.9mpg, the Justy can only manage a comparatively paltry 40.9mpg. You'll pay a group 6 insurance premium, the same as you will in the 1.3 version of the Swift, but this isn't particularly competitive when compared with other cars in the class.

Servicing will be cheaper than the Swift, though, because it needs to be looked at every 12,000 miles, rather than every 6000 for the Suzuki. 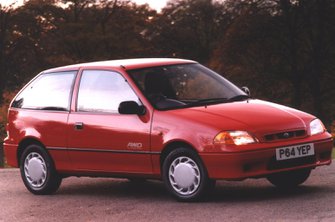