There’s only one choice of engine in the Jimny: a 1.5-litre four-cylinder petrol unit that makes its 100bhp and 95lb ft of torque without the help of a turbocharger. With the standard five-speed manual gearbox, acceleration is less than leisurely and top speed is just 90mph. The gearbox has a very wide gate and long throw, so trying to find first, or second, or third, is an act of aiming and hoping for the best.

An automatic unit is available, but there are only four gears, so you need plenty of revs to get it to do anything, and it doesn’t change up until over 4000rpm. There’s no denying getting to motorway speeds is a real struggle, but once you’re there it sits relatively happily, even if it doesn’t sound like it.

But the Jimny isn’t really designed for the road. It’s an off-roader through and through, and you can’t fault its capabilities when you get it onto the muddy stuff. All Jimnys come with part-time, low-range four-wheel drive. Once engaged, there’s no other configuring required, unlike with the myriad settings in a Land Rover. Just hit hill descent control, if you like, and prepare to take on mud going up hills, gravel going down hills or deep water with staggering capability. The similarly priced Dacia Duster 4x4 is almost as competent and puts on a good show taking on the same array of obstacles, but the Jimny can’t be beaten in this price range. In fact, the Jimny can outperform cars costing far more on a challenging off-road course, such as the Jeep Renegade.

Although the Jimny has squidgy suspension, its simple live axles struggle with potholes, expansion joints and other sharp bumps, sending a jolt through your seat. While it doesn’t do too badly on smooth, straight roads, the Jimny still allows too much body movement, bouncing considerably over any undulations. It feels like you’re riding a small bucking bronco.

Venture off road and the Jimny is much more impressive. Crawling along using the low-range gearbox, it can flex over large obstacles while keeping all four wheels on the ground and the body remarkably level. Yes, it crashes over considerable obstacles, but in something as small and bouncy as this, what do you expect? 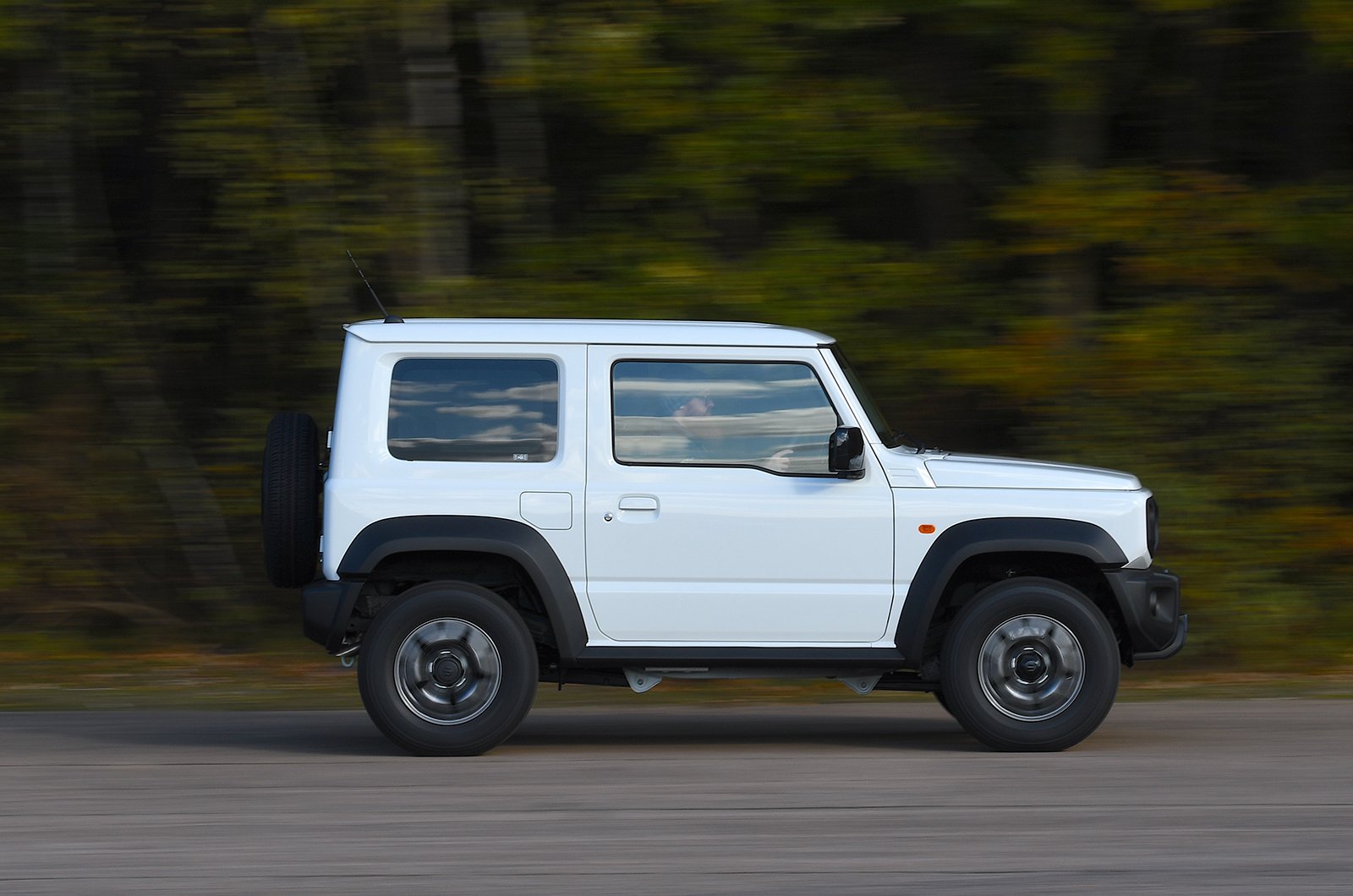 If you’ve got used to small SUVs driving much like a regular hatchback, the Jimny will come as something of a shock. Its standard road tyres don’t have much grip, so you’ll be squealing around roundabouts at surprisingly low speeds. Even before you get to this point, many will already be lifting off the accelerator pedal due to the dramatic body lean.

You’ll also find that you have to turn the steering wheel a long way before the car even thinks about changing direction, with inches of travel either side of centre. Once you’re cornering, you’ll find you get no sense of connection to the front tyres. The turning circle is more like captaining a ship than neatly executing a three-point turn.

This does have its advantages, though. Off road, there’s no steering kickback as you drive over rutted terrain, and the Jimny’s short length means it has impressive approach and departure angles to take on steep hills and ridges. There may be no true locking differentials, but the electronic traction control system is able to brake spinning wheels to keep you moving. Put simply, the more off road you go, the more the Jimny makes sense.

The 1.5-litre petrol engine needs working hard before it’ll deliver its modest power reserves, generating a fair bit of noise. Not only is it loud, but it also sounds strained, especially as you approach the upper reaches of the rev range.

Not helping matters is the fact that both the manual and automatic gearboxes have short ratios, meaning the engine is loud at motorway speeds. Add plenty of road and wind noise into the mix and it’s a car that will have you reaching for the volume control on the stereo. A relaxed cruiser it is not.