The Toyota Prius holds onto its value brilliantly, and that should only improve now there are signs that buyers are starting to shy away from diesel-powered cars in the wake of the emissions scandal. As such, even early examples of the third-generation Prius that have more than 130,000 miles on the clock and been recorded as a Category C or D write-off will cost you £4000.

The Prius is, though, renowned for racking up huge mileages without a problem, so you might not necessarily need to avoid something with a six-figure mileage at £5000, provided it’s got a detailed service history and has obviously been looked after.

There’s a good reason you see so many Uber and private-hire drivers using a Prius: they are incredibly cheap to run. For that you can thank a combination of excellent fuel economy in urban driving, where you can expect to see 60mpg or more, and low CO2 emissions that made the third-generation Prius exempt from road tax.

The Prius is less efficient when driven on the motorway, but even then you should see average economy close to 50mpg. Economy for the plug-in Prius depends entirely on how often you charge it; used in short bursts and charged every 15-30 miles, you hardly ever need visit a petrol station.

A basic service costs £185 at a Toyota dealership, and a full service is £335. As part of both, Toyota will carry out a free annual ‘Hybrid Health Check’ to ensure the battery and electric motors are working as intended. This is well worth doing because as part of it Toyota will give you an extra year of warranty on the battery right up until the car is 11 years old, regardless of mileage. If you have your car serviced elsewhere, you can still purchase this hybrid health check and the accompanying extended battery warranty for £39. 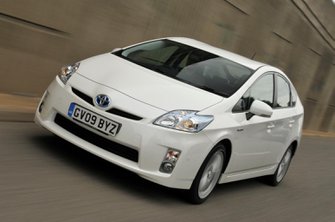