The Vauxhall Grandland X’s engine range opens with a turbocharged 1.2-litre petrol (badged 1.2 130PS Turbo). You might expect this to struggle given its small size, but it produces a respectable 128bhp. You have to work it hard before it gives its best, though, so it can feel a little strained when you have to get up to motorway speeds on a short slip road, for example.

The less powerful Skoda Karoq 1.0 TSI 110 is a little quicker, but this is still our pick of the Grandland X range; a larger more powerful 1.6-litre petrol engine (badged 1.6 180PS Turbo D) is available, but it is only available on top-spec Ultimate models so it doesn’t make a lot of financial sense.

As you’d expect from a grunty diesel, the 128bhp 1.5-litre Turbo D accelerates more strongly from low down in the rev range than the 1.2-litre petrol, whisking you up to motorway speeds briskly enough. It runs out of puff quickly when driven hard, though, so you’ll be changing through the gears quickly.

A six-speed manual gearbox is standard with the 128bhp diesel and petrol engines, while an eight-speed automatic ‘box is standard on the 1.6 petrol and optional on the lesser engines.

There’s a choice of two plug-in hybrids, each of which have an eight-speed automatic gearbox. The Hybrid is front-wheel drive and offers 221bhp, while the Hybrid4 adds an electric motor to power the rear wheels, taking total power up to 296bhp – enough for a claimed 0-62 0-60mph time of 5.9 seconds.

However, the standard Hybrid isn’t exactly slow (we recorded a 0-60mph time of 7.8 seconds at our private test track) and its claimed all-electric range is only one mile short of the Hybrid4 at 34 miles (WLTP) – although you can expect a figure closer to 25 miles in real-world driving conditions. Therefore, it’s hard to see why you would make the huge leap up in price for the Hybrid4 for very little real-world gain (we’ll discuss pricing in more detail later on).

The ride in the Vauxhall Grandland X isn’t as forgiving over poor road surfaces as the Volvo XC40’s, especially around town, where larger abrasions can send a shudder through your seat.

It does settle down at higher motorway speeds, though, which is something that can’t be said for the constantly unsettled Hyundai Tucson. Of course, with the extra weight of their batteries, the Hybrid models feel a little more lumpen around town than the regular cars, but they stop short of being uncomfortable.

The XC40 and sportier rivals such as the Seat Ateca also have the edge when it comes to body control. On undulating country roads the Grandland X’s relatively soft suspension allows the body to move around quite a fair bit, jostling you and your passengers around. For front seat passengers this is something you’ll be aware of rather than overly annoyed by, but for those in the back it could cause a little bit of car sickness, so make sure you take the whole family along on your test drive. 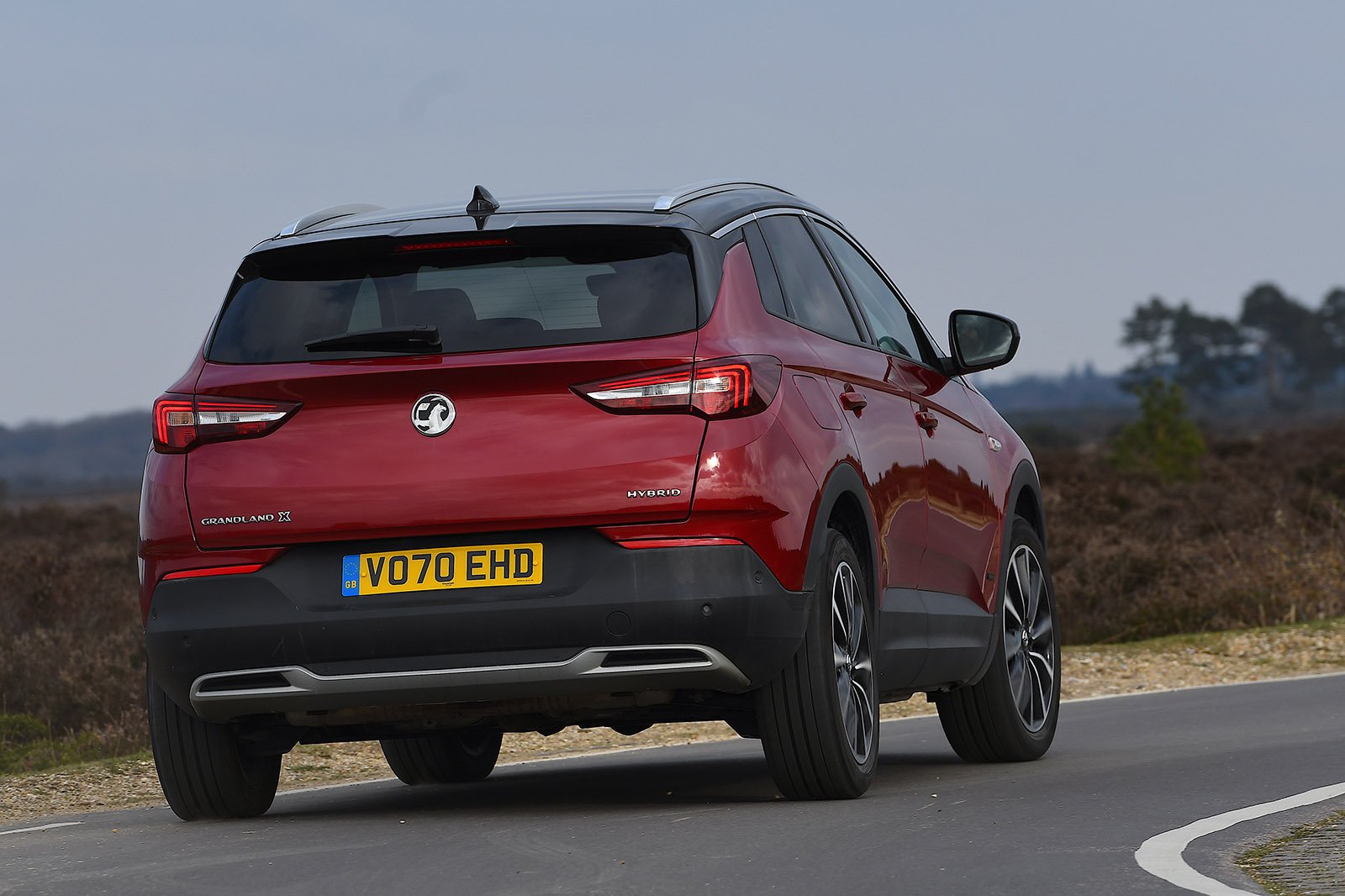 Despite fairly soft suspension, the conventionally powered Vauxhall Grandland X doesn't sway about too much through bends, but there is a noticeable amount of nose-dive under braking and the opposite sensation under hard acceleration.

The considerable extra weight of the batteries of the hybrid models leads to a bit more body lean and makes them feel more top-heavy through quick changes in direction. Grip levels are fine in all variants, but handling is tidy rather than enjoyable.

The steering feels vague around the straight-ahead, leading to a rather dead feel on the motorway, but once you turn the wheel past the first few degrees the car starts to change direction quite quickly. That inconsistency can take a while to acclimatise to; in a Seat Ateca, for example, the steering is more progressive and feels more intuitive.

Put simply, if driving pleasure is a high priority, the Seat Ateca is much more likely to satisfy.

The Vauxhall Grandland X's three-cylinder petrol thrums away and sounds rather coarse at high revs, plus there’s a constant whine from the engine when settled at cruising speeds. It also sends quite a few vibrations through the pedals and gearlever at certain engine speeds, and, while the diesel is quieter overall, it still makes a racket, especially at higher revs.

Manual models have a rather long throw to their gearshift, while the optional automatic in petrol and diesel models shifts gently between gears, but is a little too keen to kick down.

Hybrid models run smoothly and quietly on electric power, but once the 1.6-litre petrol engine kicks into life, you can’t help but notice it sending quite a few vibrations through the controls. Thankfully it’s relatively quiet when you’re pottering around and at a cruise, but it becomes rather coarse if you really put your foot down.

The switch between petrol and electric running isn’t as seamless as that you’ll experience in the Kia Niro plug-in, either, and the hybrid’s automatic gearbox is dim-witted and slow to respond when you need a burst of acceleration.

From about 50mph upwards in all versions, you have to put up with some wind noise emanating from around the door mirrors and, on coarse surfaces, a degree of road noise, too. It’s not overwhelmingly loud, but the Volvo XC40 is noticeably quieter.

The Toyota C-HR is comfortable, fun, generously equipped and t...

Classy, comfortable and great for safety. And a former Wh...