The Vauxhall Insignia engine range is refreshingly simple, with just two petrol and two diesel engines to pick from. Things kick off with the 1.5 Turbo D, a 1.5-litre diesel that’s available with a six-speed manual or eight-speed automatic gearbox. With a modest 120bhp, it matches the power output of the entry-level 2.0 TDI Skoda Superb. However, while that car’s engine delivers surprising urgency from below 1500rpm, the Insignia’s is very weak below 1750rpm before suddenly waking up and delivering a dollop of power.

Well, maybe not a dollop – a 10.7sec 0-60mph is nothing to write home about, and it rises to a yawning 11.5sec with the optional automatic gearbox. It’s not like the equivalent Superb is faster outright, but its extra low-end urgency means you don’t have to work it anywhere near as hard, making for more relaxed progress. Not helping matters is the Insignia’s exceedingly long gearing, which means you have to shift down a cog or two with frustrating regularity. The 2.0 Turbo D knocks a couple of seconds off the 0-60mph run, although we’re yet to sample it.

The 197bhp 2.0 Turbo is a far stronger performer, whipping from 0-60mph in just 7.2sec. You don’t need to work it at all hard to make reasonable progress, and it's pleasingly brisk if you do explore the upper reaches of the rev range. Even the top 227bhp GSi version of this engine doesn’t have the legs on more potent versions of the Skoda Superb, or more premium alternatives that include the Audi A4, BMW 3 Series and Mercedes C-Class, though.

We found that the Vauxhall Insignia equipped with standard suspension and relatively small 17in or 18in wheels handles crests and compressions on smooth roads in a reasonably relaxed way, proving less floaty than the Skoda Superb. However, throw in some craggy surfaces and the ride quickly deteriorates, with the car fidgeting noticeably and thumping over abrupt imperfections, such as potholes.

Things do improve markedly if you’ve opted for the 2.0 petrol (only available in SRi VX-Line Nav) as this gets Flexride adaptive dampers as standard. They’re a bit too floaty in Tour mode, yet Normal brings a good balance of control and comfort at speed with much less fidget than regular models. However standard 20in wheels mean we’d still give potholes a wide berth. We haven’t tried the GSi’s adaptive sports suspension.

Regardless of model, you’ll find the Skoda Superb a comfier cruiser, especially if you tick the box for adaptive dampers. 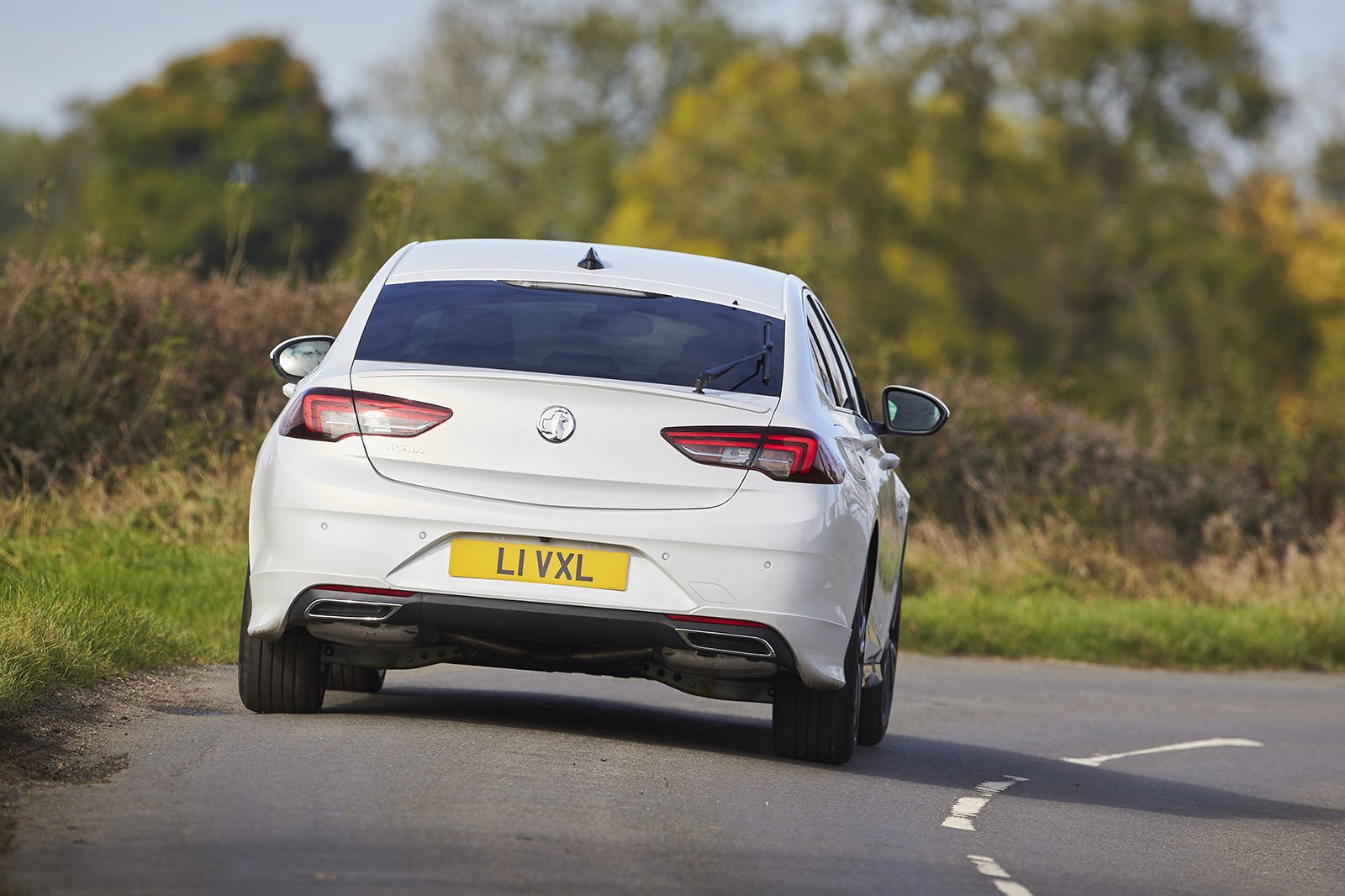 There’s nothing dubious about the way the regular Vauxhall Insignia handles, but it certainly doesn’t encourage you to have fun. The steering doesn’t have quite enough reassuring weight when you’re cornering at speed, and the car never feels particularly agile.

We found the 2.0 Turbo petrol SRi with its adaptive suspension, big wheels and wider tyres was happier to be hustled along. There’s plenty of grip and the suspension’s Sport mode tightens the handling by an appreciable amount without ever making the Insignia truly fun to hustle along. While all Insignias roll less in the bends than a Skoda Superb, keen drivers should look towards the BMW 3 Series or Ford Mondeo.

That said, we’re yet to sample the GSi, which comes as standard with adaptive suspension and a clever four-wheel drive system that’s able to shuffle all the engine’s power to the rear wheels. We’ll let you know when we’ve tried it.

Unlike its competitors, the Vauxhall Insignia's diddy 1.5 diesel has three, rather than four, cylinders. The good news is that it really settles down at motorway speeds – more so than the entry-level diesel in the Skoda Superb – so you’re unlikely to hear it unless you’re lugging up a hill or accelerating away from yet more roadworks.

However, you’re often working the engine pretty hard to get up to speed at a respectable pace, and you’ll be aware of it grumbling away in front of you when you're not driving at a constant speed. You’ll also feel noticeable vibrations buzzing through the steering wheel and seat, as well as pulsing through the clutch pedal as you push it down. The 2.0-litre petrol is a much smoother companion, sending far fewer tremors through the controls and sounding far sweeter.

Even with the smallest 17in wheels, road roar is surprisingly noticeable at all times. It builds up to become a constant and irritating drone at motorway speeds and, particularly on coarse surfaces, this makes it hard to relax. This is more noticeable on sporty models with big wheels.