What used Vauxhall Omega estate will I get for my budget?

How much does it cost to run a Vauxhall Omega estate?

Buyers might burn with desire to park an Audi A6 or a BMW 5 Series on their driveway, but not a Vauxhall Omega. Still, at least that means low prices and an advantage for those who just see their car as an A-to-B tool and not a 'lifestyle' extension.

Insurance costs are OK for the lower models - the least powerful diesel requires no more than Group 12 coverage and most of the range sits in Group 13 or Group 14. However, the V6 models are much dearer, in Group 16 and Group 17.

As you might expect, these are also the most expensive to fuel, but economy isn't great on any models, because the Omega is a heavy car. An official 36mpg is a pretty poor show for the 2.5-litre diesel, although the four-cylinder engines are better, with a claimed 40mpg.

Major service intervals are set at a lengthy 20,000 miles, which should help to keep costs down. However, the diesel engines should have their oil changed every 5000 miles, which does precisely the opposite. 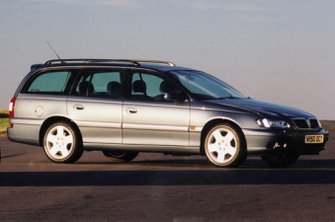