As we said in our introduction, right now you can only order the Volvo XC40 Recharge Pure Electric with a big, 78kWh battery and two electric motors that dish out 402bhp and 487lb ft of torque in total. One electric motor drives the front wheels and the other the rears, so the car is four-wheel drive.

Acceleration, as you might imagine, is mega: the 0-62mph sprint takes 4.9sec. Even by the rapid standards of electric cars, that's swift. The quickest version of the Audi E-tron covers the same ground in 5.7sec, and the Kia e-Niro musters a time of 7.8sec. But while this XC40 Recharge is quick, the Tesla Model 3 Performance is quicker still, offering a frankly ridiculous 0-60mph time of 3.3sec.

When it comes to electric cars, though, performance isn’t just about how quickly they'll go but also how far they'll travel between charges. The official WLTP range for the XC40 Recharge is up to 260 miles. We found that it managed 203 miles in varied real-world driving during fairly middling temperatures.

That's not as good as the range that the Model 3 Long Range (329 miles) or Volkswagen ID.4 (323 miles) will officially stretch to, but it's still decent by class standards. Indeed, the Audi E-tron 50 quattro and Lexus UX300e don’t even make it to 200 miles of official range, while a range of around 250 miles is par for the course in many of the XC40 Recharge’s other rivals.

The XC40 Recharge Pure Electric doesn’t have adaptive suspension (it's not even offered as an option). That's fairly unusual for a premium electric SUV, but the XC40 is one of the more comfortable options in the class anyway.

It’s smooth and settled at motorway speeds, and slicks tidily over scruffy town roads as well. Hit a mid-corner pothole or expansion joint and there’s a harsh jolt that the lighter, conventionally powered petrol XC40s would absorb with less fuss. Still, it doesn’t disturb the car’s grip on the road, and by the standards of electric cars the XC40 Recharge is comfortable, even on big, 20in wheels.

Being tall and heavy, the XC40 Recharge Pure Electric leans a fair bit through corners, and while it has lots of grip and an abundance of performance, it still feels most at home in relaxed driving. Sure, you can have fun slinging it gamely through corners at fairly remarkable speeds, but there’s no real sense of the XC40 Recharge even trying to be a fun, involving sports SUV so much as a composed, confident family SUV with comical straight-line gusto.

The light steering in Normal mode feels a touch vague even around town, but Sport mode beefs up the weight a bit, and we’d be tempted to leave it in that setting all the time. Regardless of the mode, the XC40 Recharge is an assertive yet easy car to drive in any situation; just don’t expect it to be as much fun as a Jaguar I-Pace or Ford Mustang Mach-E, nor as mind-bogglingly grippy as the Tesla Model 3 Performance. 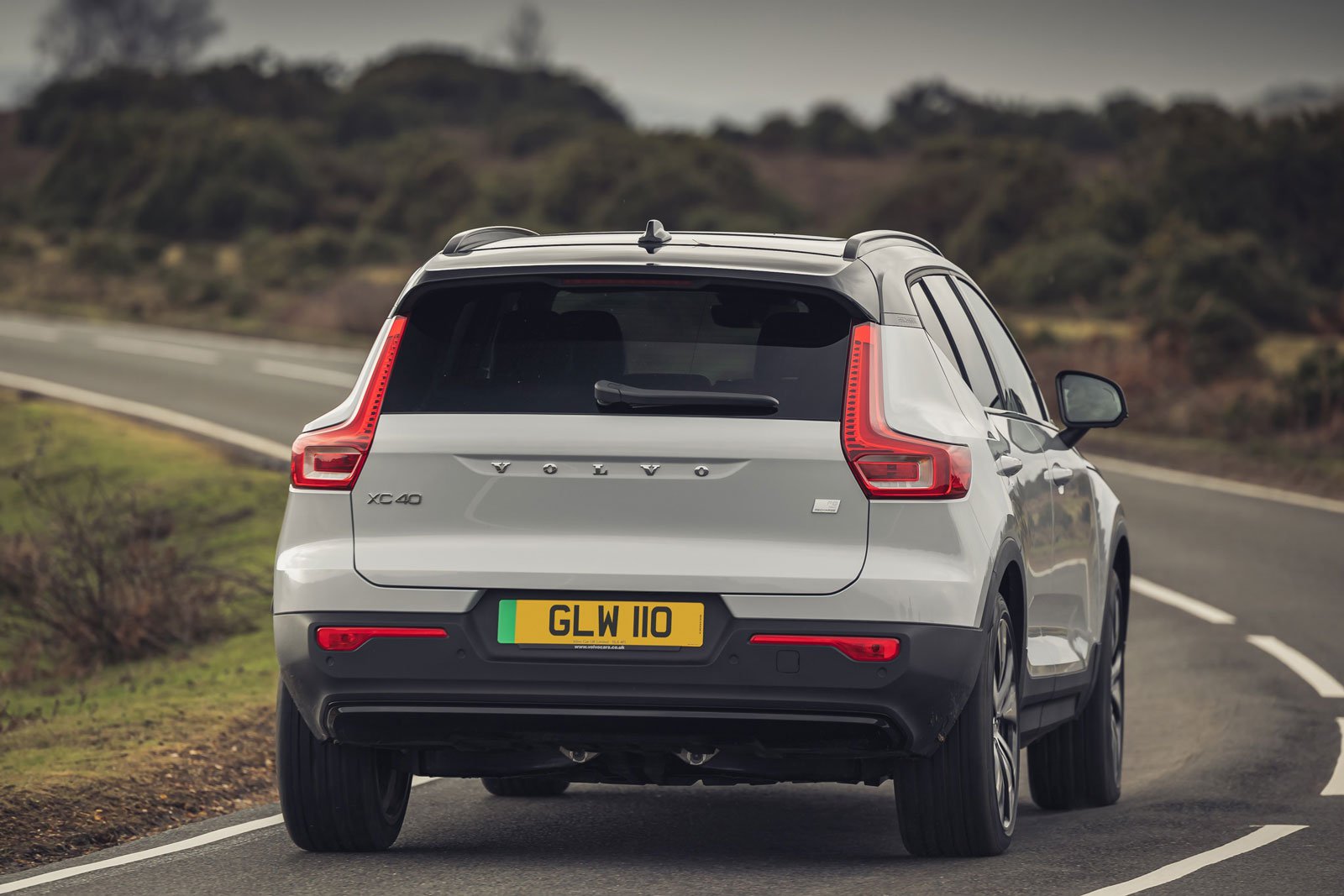 There's some mild wind buffeting from around the windscreen at motorway speeds, plus quite a bit of road noise, and both are a lot louder than you’ll experience in the hushed Audi E-tron. The XC40's electric motors whisk you along in calming quiet, though.

It's relatively easy to drive smoothly, too. The brakes respond fairly consistently when you squeeze the pedal, plus there's a 'one pedal' driving function so that just lifting off the accelerator gradually slows the car down to a complete stop.