Which used Mazda MPV MPV should I buy?

The diesel is undoubtedly the pick of the bunch, because it's refined and strong. By contrast, the petrols need to be worked hard to encourage any useful effort out of them, and they get wheezy when they are.

Unusually, the MPV isn't offered with a choice of trims, so all models come with an electric sunroof, alloy wheels and a CD player. Air-con with separate front and rear controls is also fitted.

On the safety front, you get twin front and side airbags, but there are no rear or curtain airbags. Petrol models have traction control to reduce wheelspin in slippery conditions, but diesels miss out on this useful feature, but compensate by having larger alloys instead.

The MPV received a face-lift in November 2003, with a restyled headlights and an enlarged front grille. 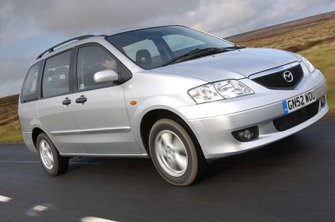