* Face-lifted Freelander driven in the UK * Fresh interior brings cabin up to date * On sale now, priced from 23,700... 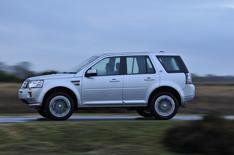 The Land Rover Freelander 2 is a popular choice in the UK. Even with the sharp new Range Rover Evoque encroaching on its price territory, the Freelander's bluff looks and more spacious interior still have plenty of appeal.

Land Rover has tried to boost that appeal by giving it an entirely remodelled dashboard and extra equipment, although you'll be hard pushed to notice the new LED headlights and styling tweaks.

Engines were refreshed in 2011 and remain unaltered, which means a 2.2-litre diesel with 148bhp or 188bhp is the only option. The lower-powered engine is available with two- or four-wheel drive badged eD4 and TD4 respectively and is fitted with a six-speed manual gearbox.

This means the headline figures remain the same, with the greenest (at 158g/km and 47.1mpg) and cheapest Freelander 2 eD4 kicking the range off at 23,700.

What's the 2013 Land Rover Freelander 2 like to drive?
Very much the same as it was. Refinement on the motorway is let down by substantial wind noise around the windscreen, although the cabin is a fairly hushed place to be at lower speeds.

There have been no changes to the suspension, so the Freelander soaks up rutted surfaces and potholes better than most cars in this class. That said, we'd avoid the optional 19-inch alloys that were fitted to our test car because they give the ride a slightly firm edge.

The compromise is some sloppy, ponderous body movement, but the Freelander remains well controlled and manageable, even at higher speeds and in tight corners.

The automatic gearbox in our test car lets down the side a bit. It's slow-witted when you want to make rapid progress, although it's pleasant enough in unhurried driving, changing gears in an easy-going way.

Vigorous driving doesn't suit the 188bhp 2.2-litre diesel engine, either. It pulls strongly in its muscular mid-range, but allowing it to run into higher revs results only in unpleasant diesel clatter and underwhelming performance.

However, the Freelander is still best in class when it comes to off-road performance. The variable four-wheel drive system, Terrain Response, has been upgraded and is now standard on all four-wheel drive models.

What's the 2013 Land Rover Freelander 2 like inside?
This is where the real improvements have been made. The basic dashboard architecture remains, with its upright centre column that houses all the major switchgear.

However, where there was an unsightly cluster of buttons and a scattering of old-school green backlit displays to accompany them, there is now a streamlined array of rotary dials and fewer buttons.

Even the chunky Terrain Response rotary dial has been lost in favour of some minimalist switches in front of the the gearlever.

The colour touch-screen is standard from mid-range XS models upwards, and while it's not the most intuitive to use, it gets easier with familiarity and it completes the new, up-to-date look. Having the one-touch buttons beneath the screen to take you straight to a chosen main function is particularly useful.

Otherwise the Freelander offers the same pros and cons as ever. The upright driving position, armchair-like seats and huge expanses of glass make for great visibility and a relaxing place to cover many miles.

The boot is disappointingly small, but at least rear passengers will have adequate head- and legroom.

Should I buy one?
Rivals, including the Mazda CX-5 and Honda CR-V, are cheaper, bigger and greener, but the Freelander still delivers the best compromise of off-road and on-road dynamics. What's more, this upgrade has endowed it with one of the most appealing interiors in the class.

Just be careful where you buy in the range. A mid-range 29,200 XS model with 148bhp and four-wheel drive will get you the key interior features and the 17-inch alloys that will deliver the best ride quality. The near-40k price of the top-spec car tested here is just not justifiable for a Freelander.