* Teaser images of Cascada convertible revealed * Car goes on sale early next year * Longer than an A5, full-length fabric roof... 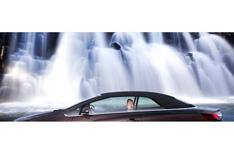 This is the Vauxhall Cascada, a soft-top convertible that will go on sale early next year.

The Cascada has an electrically folding fabric roof, which can be operated at up to 30mph.

Prices have yet to be revealed, but we would expect the car to cost from around 24,000. More details will be revealed soon, but the Cascada won't be launched at the Paris motor show later this month Vauxhall's star car at the show will be the Adam, a new premium supermini to rival the likes of the Fiat 500 and Mini.

Also arriving ahead of the Cascada is the Mokka, a supermini-based SUV that will go on sale before the end of the year.

Vauxhall says the three cars will help 'refresh' customers' opinion of the brand.

The Vauxhall Cascada will go on sale early next year